Well after a week of players strikes, an agreement was reached between the football and player association and now finally we'll be able to see some matches.

This is going to be sort of first fixture in a way and knowing the LFP they are going to cram up the previous, real first fixture in a mid week at some point, possibly November or January, but who knows.
What is important is that the Spanish league is finally going to start after a long and eventful summer and we are going to see Valencia CF play its official match and start the fight for better placement than last year and coming close to Real Madrid and Barcelona. 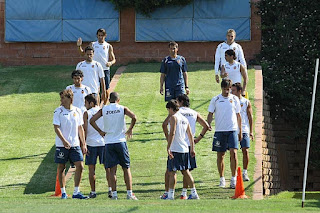 Valencia CF preseason has been quite good, with a mixture of results, but overall good showing, certainly way better than last season and we are coming in with a lot of new players into this season, as well as a lot of players having left Valencia CF.

Some of the more notable players that have left us are Joaquin Sanchez, Isco, Vicente Rodriguez and Juan Mata, but we've brought in young and very talented players to replace them with the likes of Daniel Parejo, Pablo Piatti, Sergio Canales and Adil Rami.

The team has trained well for the past week and hasn't dropped the fitness level, furthermore there are no reports of injury and lets hope it stays that way for as long as possible. There is also good news on the transfer front with reports saying Valencia CF has signed Victor Ruiz, although its still transfer speculation and anything can happen till the transfer deadline.

Result prediction:
Valencia CF 2-0 Racing Santander
Its likely to be a tough match and our history with Racing shows that these matches always end with only 1 goal, at least in the last 3 years, but this time I think Valencia CF is much better prepared and packs bigger punch in offense. Valencia CF should win this two to zero.
Posted by SlickR at 9:28 AM
Email ThisBlogThis!Share to TwitterShare to FacebookShare to Pinterest
Labels: match preview
Newer Post Older Post Home