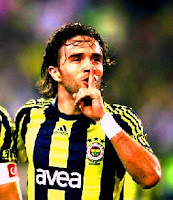 There are reports coming from Turkey that the deal between Fenerbahce and Valencia CF for the transfer of right back Gonul Gokhan is almost done and the turning point has been that PSG signed Diego Lugano from them and not Gokhan Gonul as it was reported.

This means Valencia CF has no competition and with Fenerbahce very likely to be moved to the Turkish second league due to bribery scandals they are looking to sell and reports have it that the fee that is in the final stages of negotiation is 8 million euros.

It would be fantastic if Gonul Gokhan transfers to Valencia CF, as he is probably the best right back in Turkey right now.
Posted by SlickR at 5:51 AM
Email ThisBlogThis!Share to TwitterShare to FacebookShare to Pinterest
Labels: news, transfer speculations
Newer Post Older Post Home