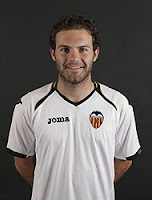 Valencia Football Club has reached an agreement with Chelsea FC for the transfer of the player Juan Manuel Mata. The agreement is subject to the relevant medical tests.

Valencia CF reached the agreement for the sale of Juan Mata to Chelsea FC today after more than a week of negotiations. Mata signs for Chelsea.

The transfer fee is reportedly 31 million euros and Chelsea FC agreement with Juan Mata will have him stay at Chelsea FC for 5 years.

I want to wish Juan Mata the best in his career, he has been a great player and person and never caused problems for Valencia CF.
Posted by SlickR at 3:15 AM
Email ThisBlogThis!Share to TwitterShare to FacebookShare to Pinterest
Labels: news, official transfers
Newer Post Older Post Home