Valencia CF is going to play the 6th preseason match tomorrow against English side Liverpool FC. From the looks of it Liverpool is not going to present much challenge to Valencia CF as Liverpool have been doing really poorly in their preseason matches so far and with their season to start earlier than Valencia it doesn't look good for the boys in red. 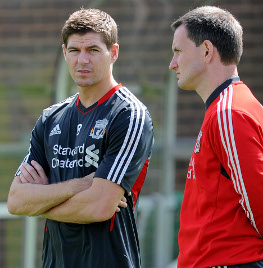 Liverpool FC ended last season on a very positive note with new manager Kenny Dalglish leading the team to a 6th place finish beating out Everton and acquiring the second most points of the second half of the season under Kenny.

Liverpool FC fans had every reason to be excited for the new season with new owner, new manager and some great signings in the winter transfer market last season, the likes of Suarez and of course the infamous and way overpriced Andy Carroll. He became one of the most talked about players and basically the laughing stock at English football and the overpriced English market.

Liverpool FC would do really nice in the summer transfer market as they brought in Steward Downing from Aston Villa, Charlie Adam from  Blackpool, the surprise player last season with his great performances. Apart from those purchases Liverpool FC were interested in Valencia's own Juan Mata and there was a lot of speculation that Mata could join Liverpool, but ultimately they decided to bring in Downing as he was a cheaper option, albeit a lot weaker option.

With Valencia CF being their last preseason match before the premier league kick-off Liverpool will be hoping to show their A game and be competitive against their toughest opponent yet Valencia CF.

Valencia CF on the other hand are coming to this match quite comfortable and confident in their ability after a great showing in Germany against Hamburger SV. With Liverpool FC performing poorly in preseason our team will feel really confident, though hopefully not overconfident and Emery should talk to the players and put things in perspective. We can't start to relax now and we need to push even harder, beat Liverpool 3 or 4 goals to zero and go really prepared against Roma for the first match in the Mestalla.