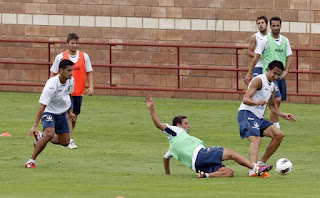 Now to the match preview. Valencia CF won the last preseason match against Sporting Lisbon 3-0 and while it wasn't the best play it was at least a high enough victory for us to forget the previous disappointment at the feet of Rapid Wien.


The coach has worked quite a bit on the technical side of things with close ball control, possession, passing and some attacking moves. The players were put in two groups with the ones that played more training on possession and the second group on the more tactical side of things. The match against Hamburg will be a good measurement how we stack up now after defeating Sporting 3-0 and if we can achieve a positive result here.


Hamburg SV is a German club based in the same name town Hamburg and in case you were wondering yes the hamburger name originates from Hamburg. The theory is that stuffing meat in between two bread pieces was a specialty in Hamburg and when many fled to the USA the name catched on to describe the meal.
Hamburg SV is a well known name in German football and is the only team to never been relegated from top flight league.


HSV reached the second round of the 2011/12 DFB Cup on Saturday afternoon, by way of a narrow 2-1 win over fifth division side VfB Oldenburg. This means that HSV might not be as well prepared and is a chance for Valencia CF to take.

Valencia CF on the other hand has won 3 of its 4 preseason friendlies with 3 of them finishing with clean sheets, with the one sticking out with 4 goals conceded being the Rapid match.
Valencia CF has had really bad news with injuries and its pretty much the same thing once again with Guaita, Aduriz and now Adil Rami being injured.

Good news is that Tino Costa has returned and hopefully he will get some playing time. Ever Banega is going to miss the match though as he has some more fitness to do before being able to play.