What is the new Valencia CF formation? 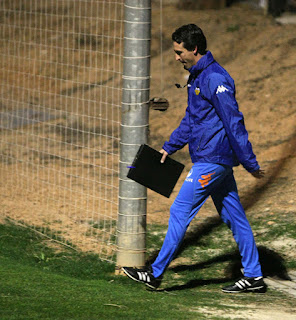 Hallo ladies and gentlemen, as you know last season Valencia CF coach Unai Emery was trying to set-up a 4-3-3 formation, but after some poor performance with that formation he reverted to the more conventional 4-2-3-1 formation in order to get results.

He is going to try the 4-3-3 formation once again this preseason, this time convinced more than ever that it is the right formation for Valencia CF and with the few new arrivals he is really going to commit and try to establish it as the basic formation Valencia CF plays.

Last year the problem was in the midfield, it was too crowded and the players were left not knowing how, where and when to move. This year though the players have had more experience and tactical education and are more flexible to formation changes and tactic changes, but they will still need a lot of practice to get it right.

I'm going to examine the options for the 4-3-3 formation in this article with the players Valencia CF currently has at hand and I'm not going to go into potential new arrivals or departures, while after the preseason end I will write another article about which formation is best for Valencia CF according to me.

Lets look at an image of a 4-3-3 formation and the player options for each position. Players that can play on several different positions will feature on more positions, they are represented as replacements if a player is injured or fatigued. 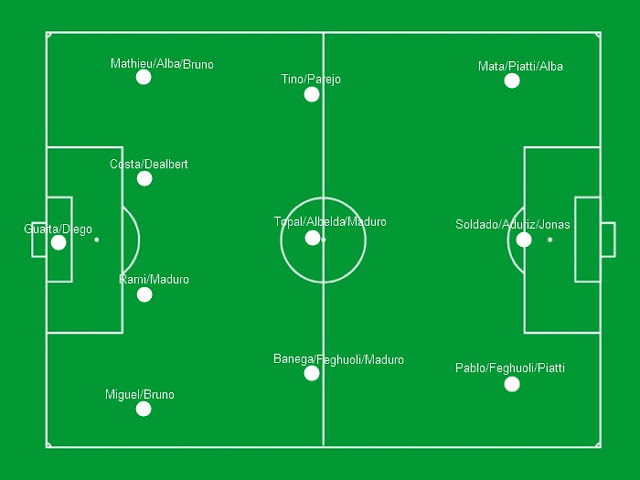 This is essentially the form of the 4-3-3 formation that is likely to be used, same as the Barcelona style with a defensive midfielder in the middle of the center field to cover for the defense, a positions that will be covered mostly by Topal, but Albelda will get some playing time and if both are injured or rested, Maduro can fill that position as well.

The upper center side will be filled by a more creative attacking midfield players and we have Tino Costa who is most likely going to be the starter and then we have Parejo who is likely to be a reserve option at that position. These two players will serve to really help out in the attack and on occasions go in the penalty area and create +1 man advantage.

The bottom center side is reserved for a holding midfielder and someone who can keep position, again Emery is likely looking at the best team with this formation - Barca and trying to emulate their tactics and placement.
This position is going to be covered by Ever Banega who can keep possession and spread the ball accurately to the attacking players. There isn't a real cover for Banega in this position, but Feghuoli and Maduro could fit in this position if Ever is injured. Even someone from Topal or Albelda can cover depending who doesn't start as a defensive midfield from them.

Then we have the attack and here there are more options to be had, but if we go with the classic 4-3-3 formula and a wider attack span then the outer positions in the forward line will be held by wingers who not only can dribble and cross, but should and will cut inside the penalty area.

The left wing is going to be held by Juan Mata, he has shown that he has a sense for goal, is a pretty good dribbler, can cut inside and is able to assist quite a bit, so he is the undisputed choice here. His cover will be Pablo Piatti who is more of a direct runner, amazing dribbler with high pace, but can't quite assist or pass as well. Of course we also have Alba who is to be pretty much cemented as a left back, but if needed he can play on the wing as well and can be a 3rd cover. Pablo Piatti on the other hand can play on the right wing and with Feghuoli able to take the Banega position there are possibilities for a lot of position changes.

The right wing is going to be covered by Pablo Hernandez, he may have had a drop in form in one period last season, but judging by my ratings he was one of the best players on average for Valencia CF, even better than Mata or Soldado. No, the ratings don't show it all and are not a real representation of skill, but its still a good measurement. Anyways cover for Pablo will be Feghuoli who is likely to stay at Valencia CF this time and be part of the squad. As said previously Piatti can also play here if there is ever the need and the possibility of positional changed is really big, especially knowing that Pablo can also play on the left wing and Mata can even slot somewhere in the middle if there is a need.

The classic striker role will for certain be taken by Roberto Soldado who is undoubtedly the most profilic striker Valencia CF has and he is the undisputed choice at this position. Waiting on their chances will be Aritz Adrriz and Jonas who are to replace Soldado if he is injured or rested.
Don't forget that Aduriz is a physical and tall player and his best attribute is the headers, so he can completely change the concept of the attack from say a direct short passing game to more crosses and long passing game. This also allows Emery to change the formation on the fly from 4-3-3 to 4-2-3-1 or combinations of 4-3-3 in order to chase a result for example.
Jonas is likely to be the third choice for the striker position, but remember that Jonas can play really well as an attacking midfielder and even on the left wing, so the possibilities for him playing are quite high and he really adds depth to the squad.

Looking at this we can conclude that ultimately the team is well covered with good squad depth and judging by this formation the weak links are for added depth to the central defender position and someone to really be able to cover for Banega in the "Xavi" position.

I would say the 4-3-3 formation has a good chance for debuting this year and looks pretty good on paper, but as we've seen from last season nothing is given and we'll have to just wait and see when the preseason starts how things develop.
Posted by SlickR at 6:18 PM
Email ThisBlogThis!Share to TwitterShare to FacebookShare to Pinterest
Labels: editorial
Newer Post Older Post Home