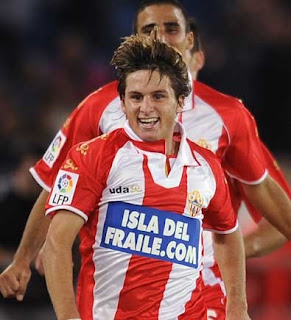 It seems that Valencia is determined to capture Pablo Piatti and is making huge efforts to sign the player. The technical staff sees Piatti as the perfect replacement for Joaquin, as well as providing additional cover to the left wing and striker positions if there is a need, since Piatti is originally a left winger.

Pablo Piatti currently plays for Almeria and has made 101 appearances there over two seasons, before that he played for Estudiantes and had 49 appearances over two years as well.

Pablo Piatti is Argentinian, born in La Carlota and has featured for Argentina U20 squad 6 times and has been called once for Argentina senior squad.

Sources close to Valencia say he is very close to transferring and that a deal can be made for 6 or 7 million euros.
Posted by SlickR at 2:09 PM
Email ThisBlogThis!Share to TwitterShare to FacebookShare to Pinterest
Labels: news, official transfers
Newer Post Older Post Home