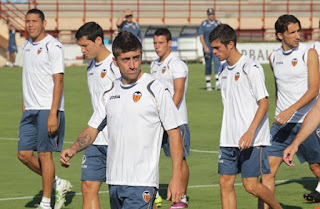 Valencia CF coach Unai Emery after the last training session in Valencia announced which players will travel to Austria and there are a few surprises here, positive if I may so so.

The only two players that are missing are Juan Mata who has an extended vacation duo playing in the U-21 and Ever Banega who is currently in Argentina for the Copa America. Juan Mata will join the team on 22.07.2011.

The positive and surprising inclusions are the youth players who now count to 5 and Nacho Gonzales.