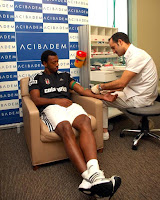 Valencia CF announced the transfer of Manuel Fernandes to Turkish team Besiktas for a reported fee of 2 million euros.

Fernandes has signed a three year contract with Beşiktaş worth €2.1 million per season.

This transfer comes after it has been known for few weeks that Valencia want to sell Fernandes to Besiktas and it was in the players hands if he would join Besiktas or not.
Posted by SlickR at 3:11 AM
Email ThisBlogThis!Share to TwitterShare to FacebookShare to Pinterest
Labels: news, official transfers
Newer Post Older Post Home