Ever Banega to transfer to Inter? 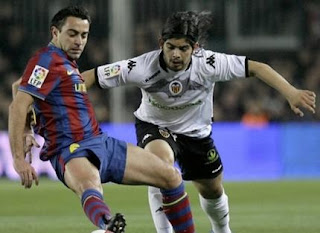 Like in a great horror movie that's how Copa America has been for Ever Banega. He made a huge mistake in his first match in which he failed to stop a slow moving ball and that resulted in Argentina chasing a goal, which they ultimately found, but no thanks to Ever Banega.

Second match he was better, at least he didn't allow a silly goal, but again he was too slow and too static. This lead to him being ousted from the first team by Gago who actually showed great skill in the two times he played.

Inter have been interested in Ever Banega and they have been tracking him seriously, but this begs the question has the Copa America increased the transfer value of Banega or reduced it? In my article how much are VCF players worth I have Ever Banega valued at 18 million euros. He is talented, young at just 23 years old, had one amazing season to show his potential and had been pretty good even when out of shape, drinking and smoking. He is also one of a kind in Valencia, he is the only ball holder.
After the performances in Copa America though there is a serious risk no one would value him that high, even though Argentina have still to play and if Ever starts and plays amazing it can up his value, chances of that happening are slim.

Right now Inter have agreed a 40 million transfer deal with Manchester United for the transfer of Westley Sneijder. If the deal is completed and that is looking very likely Inter are going to have 40 million euros to spend, but how much are they going to offer for Banega?

Reality is that if Valencia CF does not get a substantial offer that is above 16 million euros its very unlikely that the president is going to sell Ever Banega, especially since we don't have any cover for him and the current squad numbers are a bit thin.
Posted by SlickR at 3:59 PM
Email ThisBlogThis!Share to TwitterShare to FacebookShare to Pinterest
Labels: news, transfer speculations
Newer Post Older Post Home