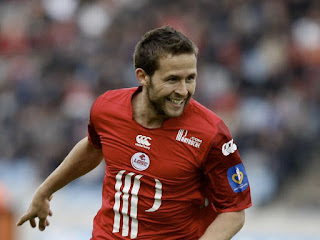 Valencia CF are reportedly interested in Lille's Yohan Cabaye. It seems that the Valencia technical secretariat along with the coach have decided that Ever Banega may leave and that they might want to sell him if a good offer comes along so they are lining up possible replacements for him and high on that list in French international Yohan Cabaye who plays for Lille. Lille just won its first French title in more than 4 decades and Yohan Cabaye has been one of the most standard players.

Valencia is hoping that the French connection and still current teammate Adil Rami is going to be enough to convince the player to switch to Valencia.

The biggest problem for Valencia though would be his price as he is currently valued at 10 million euros and since Lille just won the French title his price is unlikely to go down.
Posted by SlickR at 1:01 PM
Email ThisBlogThis!Share to TwitterShare to FacebookShare to Pinterest
Labels: news
Newer Post Older Post Home