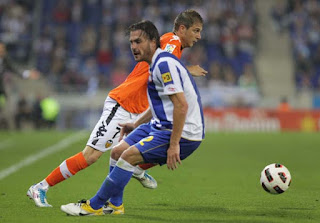 Espanyol and Valencia were both left somewhat frustrated following a 2-2 draw at Cornella.

Espanyol needed a win to boost their hopes of making next season's Europa League, but Valencia led until late in the game and will think they should have gone home with the win.

The visitors led twice thanks to goals from Roberto Soldado and Juan Mata, but Unai Emery's side were pegged back by strikes from Dani Osvaldo and Ernesto Galan.

Valencia took the lead thanks to a defensive lapse from Espanyol, when Raul Rodriguez failed to control a Javi Lopez pass and Soldado pounced to slot home a clinical finish and score his 10th goal in seven games.

Osvaldo then smashed a fierce shot past Cesar to make it 1-1 10 minutes later, but Valencia retook the lead following a quick counter-attack just over halfway through the first period.

Joaquin, Soldado and Bruno Saltor combined for Mata to score a simple second for the visitors.

Luis Garcia came close for the home side after the break, but Valencia looked likely to extend their lead as they threatened through Soldado and Joaquin.

However, the next goal fell to Espanyol after 76 minutes, when Galan poked home a loose ball after Cesar had failed to deal with Luis Garcia's shot.

Valencia remain third and are still five points clear of fourth-placed Villarreal, who could only draw 0-0 at Almeria.

Espanyol, in eighth, moved a point closer to sixth-placed Sevilla, who lost 3-2 at Osasuna.

Player Ratings:
Cezar 6 - Decent performance, not really at fault for any of the goals.
Bruno 7 - Good performance in defense as always actually and did quite well going forward for a change, provided the assist for Mata's goal.
Navarro 4 - Had one big mistake, but then saved a certain goal, still left a lot to be desired and such mistakes are just not allowable for a team of Valencia's caliber, I think Navarro may have sealed his own faith with that.
Dealbert 6 - Managed to save two of the errors Navarro made. He seems a lot more comfortable with R. Costa or Stankevicious as his partner in defense.
Mathieu 4 - Bad performance defensively, he has been way too inconsistent and it showed in this game as well. At fault for the 2nd goal of Espanyol.
Joaquin 6.5 - Good performance from Joaquin, created all sorts of problems for Espanyol all game long, but as I've been saying for so long, he lacks the vision and final ball to be useful. His runs should be converted into goals or assists.
Topal 6 - Average performance, failed to provide much of anything really.
Banega 6 - Same as Topal, did have a shot on goal, but he needs to be more active and go forward, unless he is specifically ordered by Emery to stay back.
Mata 6.5 - Scored a goal, but not as influential as he has been the last several matches. Still a good performance overall.
Jonas 5 - Missed two chances and went invisible for long periods of the game. One of his weaker games.
Soldado 7 - Scored a goal and started the action that lead to the second goal for Valencia. He missed a stunner in the second half though that would have sealed the match. Still a fine display and he continues his goalscoring form.
Subs:
Alba 6 - Came in and provided some depth to the left wing, involved in the few rare Valencia attacks.
Miguel N/A - Continued in Bruno's footsteps, but overall he did not have much to do.
Albelda N/A - Cameo appearance to close out the match.
Posted by SlickR at 3:06 PM
Email ThisBlogThis!Share to TwitterShare to FacebookShare to Pinterest
Labels: match report, results
Newer Post Older Post Home