Another week, another lackluster performance from Valencia, so whats new you ask? Absolutely nothing. I think there is sort of stagnation and lack of enthusiasm going on in the camp right now. There is no other way to describe these two looses, two weeks in a row.

Right from the start, from the first minute you can see Valencia started off with lack of ambition and lack of enthusiasm and lack of direction as well. Osasuna started the match as the dominate side and for most of the match they were in full control, absolutely outplaying Valencia.

The goal from Osasuna came from a deflection, so it wasn't as if the defense was bad or anything like that, but the problem is that it wasn't good either, against if R. Costa commits to these challenges he will actually block these shots. 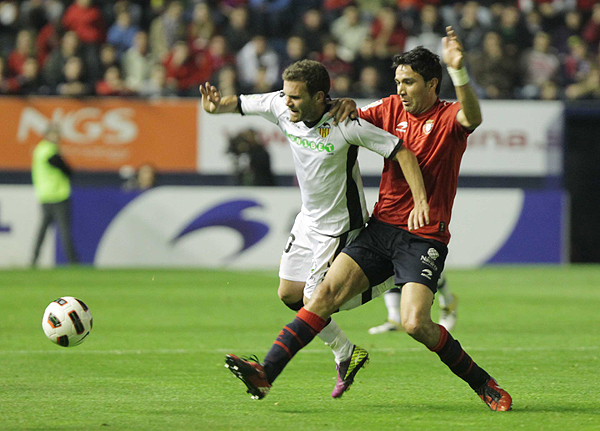 I will say it last time and I've been saying from 5-6 times so far this season about Ricardo Costa, he needs to commit more, he is like every time about 3 seconds slower, shorter or back for these shots and all of them end up in the back of Valencia's net. If he is to stay with Valencia he needs to commit more in these kind of challenges and stretch out his legs, block the shots, he is not a ballerina, he is a football player and needs to get this sorted out.

Its really bothering me now as he has made the same mistake 5-6 times now and I'm starting to think he should be sold this summer as clearly he has no clue how to play football.
I wish someone would slap R. Costa and everyone else for that matter several times in the head to wake them up.

These kind of performances in such crucial stages of the competition can't be overlooked. Villarreal won its match against Getafe earlier and is now to only 3 points behind Valencia, with 4 more matches to play. All of a sudden 3rd position isn't really guaranteed and the team is in danger of loosing the 3rd place at the table which would be terrible and knowing the president Llorente heads are going to be flying for sure if 3rd place isn't achieved.

So why did Valencia CF loose, what are the reasons for such a bad performance? - Well I seriously know that the team lacked enthusiasm, lacked ambition and had absolutely no self belief, did not the the champions material and when I say champions material I mean the stuff when they think, no they know they are better than the opposition and they would rather die that loose.

In other words the players take this as their job, you know come in the office, run around for 90 minutes, quote filled and go home. What they should be taking these matches are like finals, like every eye in the world is pointed towards them and a failure to win would mean all kind of nasty things for them, a failure to win would be the most tragic thing that has ever happened to them. They need to carry the club in their heart, in spirit and in mind and not look at it as job.

Why this is the case is another thing though and I don't have an answer for it. I seriously can't think of anything to justify or explain it.

Having written all of that I can't and wont forget Unai Emery. If they players played badly, he set up the tactics, line-up and formation badly. The moment I heard he was planing the 4-4-2 with Topal and Albelda in the middle I had a bad feeling about this match, but thought a miracle would happen and VCf would somehow win, but this is the second time I'm making this mistake. 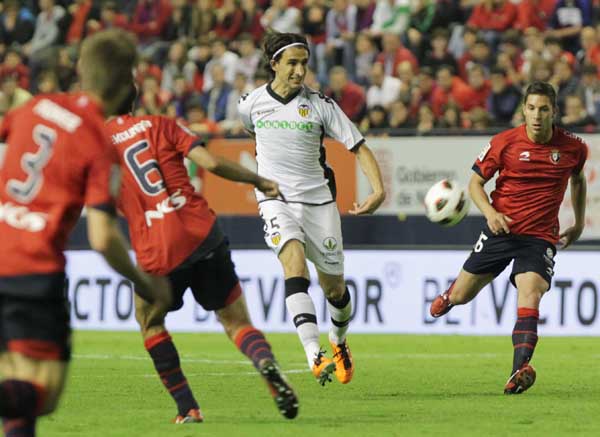 First of all lets look at the formation, 4-4-2. It was the wrong formation, especially if you plan to play two defensive midfielders that have absolutely no organization or possession skills. If Osasuna is good somewhere its at midfield, their defense is okay, but nothing special, their attack is okay, but again not really good, that leaves their midfield where they are best, so if you are going to be going for two DM you need to play a different formation in order to gain control of the midfield. With Albelda and Topal in the squad I would have went for a 4-2-3-1 formation, it would give us better defensive coverage, more midfield control with small sacrifice in attack, but using counter attacks more often to try to score goals.

If I was to go with 4-4-2 for some absurd reason I would at least play Banega alongside Topal in midfield in order to have more ball possession and in order for the attacks to be more organized and there to be some build-up. Also with the way Mathieu performed last week I would have benched him and put Alba in his place instead. I would have also given the chance to Aduriz to partner Soldado just because he hasn't played too much lately and this would have provided him with a good morale boost and provide him with a challenge.

Anyways these kind of wrong choices from Emery frustrate me, and in these cases I really want for him to be sacked and someone else put in his place. The biggest problem though is that for the amount of money Valencia have for a coach, our options are limited and its debatable if we could bring a better coach without breaking the bank, which is empty anyways.

Sorry this wasn't the standard play by play analysis or even a normal match report, but I feel its more important to address the bigger issues here, rather than just the simple play by play. I can just hope that next week Valencia win 5-0 in order to erase my bad memory from these matches.

Player Ratings:
Guaita 6.5 - Had several saves to keep Valencia in the match, a bit lucky though in his first major intervention as the attacker sort of shot into him, rather that Guaita making some kind of superb save.
Miguel 6 - Very good defensivelly, very little threat coming from his side and was able to help out in attack, but did not have a good understanding with Joaquin and they both sort of play as individuals.
R. Costa 3 - Once again if he commited just a tad more he probably would have blocked the shot that lead to the goal, he is just not the winner material and I think its best if he was sold.
Stankevicious 5 - Suspect at times, sort of unlucky to have an own goal, not necesarilly bad performance though.
Mathieu 5 - Decent in defense, but nothing special and he just did not go forward often enough, similarly as Miguel had very little collaboration with Mata.
Joaquin 4 - Absolutely impractical, when he managed to dribble past anyone he would just either return the ball back or dribble even more and loose the ball, very bad decision making and lacks the final ball to be useful at all.
Albelda 5 - Did well defensively and realistically nothing more should be expected from him, he is not a playmaker or some wizard of a passer that can find the tiniest hole in a defense and provide the killer pass, so not much to blame him for.
Topal 5.5 - He is similar to Albelda in that he has a bit more flair and can be a bit more offensive, but he is just not a type of player to keep possession or organize the play. He is a simple passer with good defensive skills.
Mata 5 - He was totally cut off from the action for large periods of time, did not link up at all with Mathieu and for most of the match struggled to do anything.
Joans 5 - Had very little to no balls to work with, often had to come down deep to get the ball and then circulate it himself in attack.
Soldado 5 - As Jonas had very little to go on to, often forced to come out wide right to get the ball and get something going, but that just left no one in the Osasuna penalty area.
Subs:
Banega N/A -  Even though he came with some time left, it just wasn't soon enough to have any influence on the match.
Aduriz N/A - Came on too late to change the outcome of the match.
Pablo N/A - Came on too late.


Unai Emery 1 - Chose the wrong formation in my opinion and the wrong line-up for this formation. He basically set up the team to loose.
Posted by SlickR at 12:34 AM
Email ThisBlogThis!Share to TwitterShare to FacebookShare to Pinterest
Labels: match report, results
Newer Post Older Post Home