Juan Mata and Pablo Hernandez to be sold? 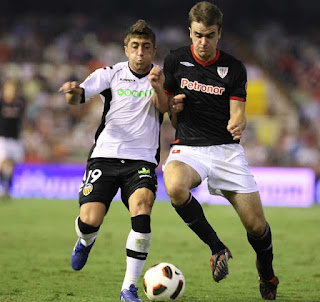 Well what would the newspapers be without some much needed transfer speculations.

Valencia CF stance on the transfer of Pablo is that he is not for sale, but they will look at substantial offers and make a decision from there.

The other transfer news is that Juan Mata could potentially leave Valencia CF and various teams from England are showing interest in the winger. The likes of Liverpool, Chelsea and even Manchester United have reportedly made contact with his agent/father.

Valencia CF stance on a possible transfer for Mata is that he is not for sale and won't listen to any offers, though that can change if a huge offer comes, along the lines of 30 million euros.
Posted by SlickR at 2:30 PM
Email ThisBlogThis!Share to TwitterShare to FacebookShare to Pinterest
Labels: transfer speculations
Newer Post Older Post Home