Valencia CF fans had a big scare tonight after Valencia felt 1-0 down to Getafe, who realistically were a lot better than Valencia in the opening stages of the match and looked set to take on the full 3 points home. 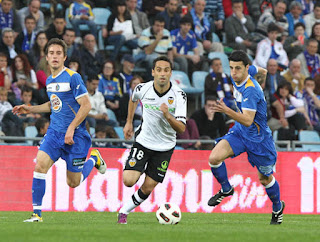 Valencia had to work really hard to comeback and it was former Getafe player Soldado who was the hero for Valencia as he scored 4 goals against his former team to enable this win for Valencia and get the team back on track and in third place.

The match started with Getafe the more dangerous team, the Valencia players were slow and barely moving, allowing Getafe to quickly close down and steal the ball, then do an attack towards Valencia goal.

Just 12 minutes in the game and Getafe scored the first goal. It was Manu who scored the goal, after he easily dribbled past Bruno, avoided R. Costa and Dealbert block and shot past goalkeeper Cezar and into the net. It was 1-0 for Getafe and it looked like this was going to be another disappointing match for Valencia.

Valencia players woke up at about the 20th minute and Mata and Pablo started doing some runs and passes, though nothing really effective. Mata was probably the most creative and lively player on the pitch for Valencia in the first 45 minutes and he had few good passes, 1 decent shot that went past the bar and few decent runs.

Not much happened otherwise, VCF midfield was pretty inactive and the link-up with the attack non-existent and the first half finished 1-0

Second half started and Valencia immediately got back on track. Mata got the ball, ran a bit forward and made a through pass that reached Soldado, who slotted the ball in the net. 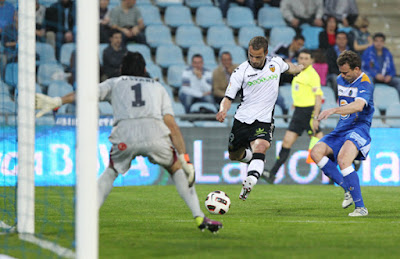 Valencia livened up a little bit and were now more dangerous going forward. Anyways in the 64th minute a similar situation as as with the previous goal arose, this time Jonas was in place of Mata, he also made a through ball that found Soldado and this one much like in his previous goal, scored again. It was 1-2 for Valencia CF.

Soldado would go on to score twice more, the third time, his hatrick was due to a silly mistake by the Getafe defense basically giving Soldado the ball and the forward did not disappoint, scoring a goal from a tough position on the wide right side.

Roberto Soldado's fourth goal would come again by an assist from Mata, who received the ball in the middle of the field, ran forward, got in a good crossing spot and found Soldado who headed the ball into the net.

Player Ratings:
Cezar 5.5 - Was not tested much, had one decent shot calmly caught, made a good save minutes later, maybe could have done better for the first goal, but not really at fault for any of the goals.
Bruno 5 - Allowed Manu past him for the first goal and looked vulnerable all match long. Did not offer much going forward.
R. Costa 6 - Decent showing, could have done better to mark Manu for the first Getafe goal though.
Dealbert 5.5 - Got a fast yellow, seemed stressed when alone at the back and unsure when on the ball, otherwise he actually did decently good pure defensively.
Mathieu 6 - Good defensively and went more forward than his partner Bruno. Decent match overall.
Pablo 5 - Offered some depth in the middle third in attack as he played more as a attacking midfield than winger, but too often overlapped with Mata. Not very effective on the right wing and invisible for long periods of the match.
Topal 6 - Did well to break up Getafe attacks and cover ground, a bit too simple at times with his passing. Needs to improve his passing range if he is to become great from good.
Tino Costa 5.5 - Tino was playing 2x better at the first half of the season than he is now. I don't know what it is, but he hasn't seem himself in the past month and a half. Didn't really do much of anything.
Mata 7.5 - Thankfully a good match by Mata. He was really creative all match long, run a lot, covered a lot of ground, made 2 assists and this is the Mata I'd like to see every match.
Jonas 7 - Great work rate, nice movement and seems to be developing good understanding with Soldado. Provided the assist for the 2nd goal.
Soldado 10 - What can I say the goal tally says it all. He scored 4 goals, worked very hard and found himself in good goalscoring positions.
Subs:
Stankevicious 6 - Solid enough, did not have trouble at the back and his passing actually helped Valencia in the middle to bring the ball from the back.
Maduro 5 - Made few touches, few misplaced crosses, pretty rusty and lacks match practice. Not enough time to do much though.
Alba N/A - Not enough time.
Posted by SlickR at 2:02 AM
Email ThisBlogThis!Share to TwitterShare to FacebookShare to Pinterest
Labels: match report, results
Newer Post Older Post Home