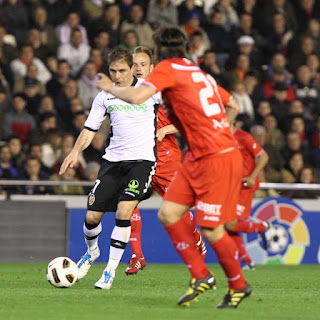 Sevilla kept their chances of achieving top-four finish alive with a fine win at Valencia.

Ivan Rakitic scored the only goal midway through the second half, slamming home a loose ball to put his side to within 12 points of Valencia who occupy fourth spot.

They were indebted to goalkeeper Javi Varas for the win, with his string of fine saves keeping Valencia at bay.

Spain winger Jesus Navas was the first to look likely for Sevilla, forcing his way into the box before flashing an effort across goal.

Valencia then thought they should have been awarded at least one penalty, with Roberto Saldado being brought down in the box by Mouhamadou Dabo, with the same man then colliding with Joaquin.

Jonas then found himself well set in the box for Valencia, but fell over as he attempted to hit the target, while at the other end, Alvaro Negredo broke clear but hit the near post instead of going across the goalkeeper.

Jonas then broke through on Sevilla`s goal, but, as Varas stormed out, the striker dinked an effort wide of his right-hand post.

Navas volleyed wide after the restart, before Jonas thumped the woodwork after taking in a Soldado pass.

Frederic Kanoute put a free header over Valencia's bar from a corner and Varas then began to excel, palming Juan Mata`s chip on to his bar, before using his thigh to bundle a Jonas header away.

Valencia were then made to pay, with Rakitic firing in an unstoppable half-volley after a blocked Negredo shot fell to him.

Varas beat away a Joaquin volley as Valencia looked to snatch a leveller, but they could not find their way through.

Player Ratings:
Guaita 7 - Good match for the keeper, after two shakier performances the last two matches.
Bruno 6 - Decent play, went forward often enough and was good at the back.
Navarro 5 - Good display from the captain, a bit too slow on two occasions, but otherwise good.
Dealbert 6 - Did well, slow as Navarro, but did not make any mistakes.
Mathieu 5 - Won 50% of the challenges with Navas, but lost few crucial challenges, didn't provide much in attack either.
Joaquin 7 - Great performance from Joaquin and always caused Sevilla problems.
Topal 5.5 - When in his position did well, simple and tidy passing with good defensive cover, but he is not good enough for a center back.
Tino Costa 6 - Fought hard, had few nice touches and generally useful, but failed to break Sevilla's defenses.
Mata 6 - Had good moments and can be considered one of his better matches in a while, but goes invisible for large periods of the match and needs to play more direct football.
Jonas 4 - Found himself in may positions to score and his movement was great, but failed to score which is the most important thing.
Soldado 4.5 - Better than Jonas as he was more active and went wide to the right to help out, had a great assist to Jonas and few shots himself, but he also failed to find the net.
Subs:
Banega 6 - When he came in Valencia CF instantly got more possession and he had one great cross that put someone from the attack alone on goal, but ultimately could not really break Sevilla's defense.
Aduriz 4 - I barely saw him. He had few sloppy touches and could not control the ball, so he did nothing really.
Alba N/A - Not enough time.
Posted by SlickR at 1:15 PM
Email ThisBlogThis!Share to TwitterShare to FacebookShare to Pinterest
Labels: match report
Newer Post Older Post Home