Valencia CF needed to win against Zaragoza to forget the loss from Schalke 04 in the champions league, bounce up and continue its path to 3rd place in La Liga. It was going to be a hard away match that much was known, but Valencia CF needs to prove its quality over and over again and win in these kind of situations and show character.

The match started quite equally, but the first bigger chance for Zaragoza and they scored. After a free kick Uche managed to escape Bruno and then out jump Topal and head the ball past Guaita and into the net. 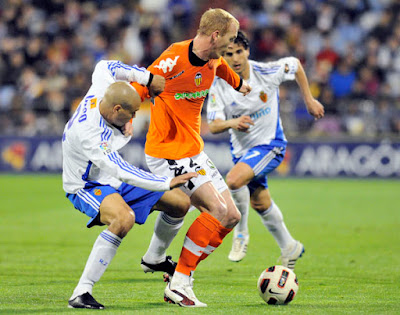 The match was quite uneventful and for most of the match there were some bad attacks, though Zaragoza were the more dangerous thanks to the mistakes of the Valencia CF midfield and Bruno in the defense with Zaragoza having a chance exactly similar to the one when they scored.

Valencia CF midfield was nowhere to be seen and could barely come close to Zaragoza goal, with one chance of note being a shot of Soldado that was deemed offside.

The biggest problem though was the attack being cut off from the rest of the players. Either Jonas and Soldado were playing too deep or the midfield was playing too deep and close to its own goal. I think it was a combination of both and then there was a clear lack of determination from the Valencia players, they all seemed still shaken from the loss to Schalke 04 and the abrupt stop of the champions league.

Unai Emery introduced Ever Banega for R. Costa in order to strengthen the midfield and link-up play better, but that didn't pay off either. Ever Banega first contact with the ball and he slipped giving Zaragoza a good chance to score and then just minutes later Zaragoza scored a second goal.

Valencia CF had 1 more half chance to score, but it wasn't to be. Overall the players looked tired, demoralized and undetermined and it wasn't strange that Zaragoza was leading 2-0.

Second half started a bit better for Valencia CF with more control over the ball, but once again the players could not muster up more than 2-3 passes in a row and lost the ball every time.

Zaragoza wasn't attacking or playing very good, but they were direct and effective, 4 chances and two goals in the first half and had additional 3 chances for goal in the second half. They were awarded two penalties also with Stankevicious making a soft foul, but still being awarded a penalty, he also got a second yellow and was sent off, Albelda came in to strengthen the defense, but soon after he also made a penalty and Zaragoza had no problems scoring from the two penalties.

Tino Costa had a measely shot on goal and pretty much nothing else, nothing seemed to work and this is the biggest defeat to Valencia this season.

Guaita 5 - Could not be blamed for the goals and had little to do otherwise with only one save.
Bruno 3 - Absolutely terrible performance, lost his man for the first goal, lost the duals constantly and offered absolutely nothing going forward.
Stankevicious 4 - Not a bad performance, but did make the penalty and along with the collective at fault for the second goal.
R. Costa 5 - Taken off early for Ever Banega. Did not make any mistake in his time on the pitch.
Alba 4.5 - Not particularity for blame for any of the goals and did play decently, but just like everyone else did not give 100% today.
Joaquin 4.5 - Probably the best player tonight, which is not saying much. Had few good dribbles but lacked the final pass.
Topal 4 - At fault along with Bruno for the first goal, could not bring the back forward from the back and his short direct passing was not suited for this kind of game.
Tino Costa 4 - Dreadful performance. Misplaced passes, unable to keep possession and failed to link-up play.
Mathieu 3 - Invisible for 95% of the match. Apart from 2 or 3 runs and few touches did not do anything.
Jonas 4 - Lost the ball each time he got it, did not find useful positions, but other than that he had absolutely no service.
Soldado 5 - Was active and tried to make something out of nothing, but with no service at all its hard for him or any striker for that matter to score goals.
Subs:
Banega 4.5 - Barely better than Topal and Tino. Misplaced a lot of passes and too static in his movement, much more is expected from him.
Mata 4 - More effective than Mathieu, which is not saying much. Could not influence the match one bit, although did have few good passes.
Albelda 4 - He is not a defender and is old and slow so could not blame him for conceding a penalty, but did not bring anything positive, although the match was over by the time he went in anyways.
Coach:
Unai Emery 3 - Obviously lacks the motivational skills, started with the team that just lost to Schalke just 3 days ago and its expected to loose in such situation. Made the wrong move to bring in Banega so early with Valencia loosing just 1-0 and Banega didn't bring much to the table.

Why this formation you ask? Well its what Emery has been using the last 2 matches and players have just settled into it, so a change is going to be negative. The players I chose are mostly fresh and have not played against Schalke 04, so in a way I'm removing the demoralized and tired ones and placing them with fresh and motivated ones.
Posted by SlickR at 12:19 AM
Email ThisBlogThis!Share to TwitterShare to FacebookShare to Pinterest
Labels: match report
Newer Post Older Post Home