On February the 6th Valencia CF will welcome Hercules CF on the Mestalla in what would be yet another important match and pursuit for 3 points. 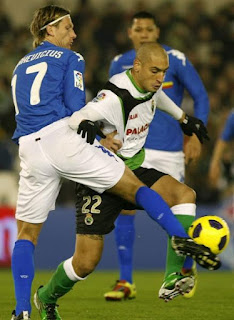 Valencia CF currently sits at 4th spot on the table with 41 points and will be looking to add 3 more points in this next match against Hercules and hopefully come closer to Villarreal, yet at the same time adding more points between Espanyol.

It is going to be hard to catch Villarreal even if Valencia CF wins, as Villarreal will have to loose points, but they play at home as well and are most likely to win. Valencia CF has some comfort because they are going to play against Villarreal, Barcelona, Sevilla and R. Madrid at home.

Valencia has had some good and some bad news this past week. Bad news is that Miguel is in a lot of trouble after its peen publicized that he faces 5 years in jail and then he showed his middle finger to reporters just 2 days ago, Mathieu has been offered take it or leave it contract extension, R. Costa got a red card in the last match and is not available for selection, and the likes of Cezar, Moya, Albelda and Mata are still recovering from their injuries.

Good news is that Navarro's red card was erased by the referee committee and will be available for selection, new arrival Jonas has been incorporated in the squad and is practicing with the rest of the team, Banega has been playing well and Chori has expressed motivation to keep on working in order to help the team.

Valencia is currently on a row of 7 unbeaten matches in La Liga and last time they've lost was against Real Madrid on December 5th in 2010. Valencia also just failed to make it to 6 straight wins after it only managed a draw against Racing. 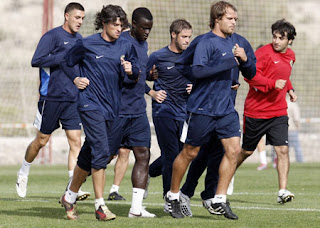 Hercules CF on the other hand are currently sitting in 13th place on the table with 22 points and are struggling at the moment. In fact they've lost their last 3 matches and have lost quite a bit of ground in the mid table fight.

Hercules have conceded 34 goals and they have one of the worst defenses in the Spanish League, only better to Sevilla, Almeria and Malaga. They boost quite an attacking threat in the form of David Trezeguet and Nelson Valdez and between them they have scored 16 goals. Even though their two forwards are quite dangerous and have scored 16 goals between them, they are still overall at the middle of the pack in terms of goals scored.

Hercules main goal against Valencia will be to get a draw and stop their recent string of losses and with that get back on track for a mid table finish.

Hercules biggest problem right now and one that could endanger their plans for a draw is injuries to three of their central defenders Pamarot Noah, Abraham Paz and Momo Sarr. Hercules only have one central defender, Sergio Rodríguez, to face Valencia and their coach Esteban Vigo will have to find a way to overcome this problem.


Valencia CF Technical:
Formation: 4-1-2-1-2
Line up: Guaita; Miguel, Stankevicious, Navarro, Alba; Maduro, Tino, Banega, Chori, Soldado, Aduriz.
Tactics: Center field attacks, medium defensive line, hugh opposing team pressure, CF player in free role, position swaps between the midfield players.
I think its the most reasonable formation in order to keep possession and be threatening. We've seen that formations with one striker don't work and unless VCF plays 4-4-2 formation the wing players just don't seem to know how to play and this is why I think this is going to be the formation and player of choice for Unai Emery.

Result prediction:
Valencia CF 3-1 Hercules CF
Hercules have enough firepower upfront to hurt our defense knowing they have the experienced and reliable Trezeguet and the talented Valdez with his pace and trickery.
Even though I think our defense is going to concede a goal, Valencia CF should also have enough firepower upfront to score 3 goals and enough talent in the midfield to control the game.
Posted by SlickR at 1:45 AM
Email ThisBlogThis!Share to TwitterShare to FacebookShare to Pinterest
Labels: match preview
Newer Post Older Post Home