First of all my prediction of 1-2 was right on the money. Every one that listened to my prediction is going to count his money tomorrow and be double happy as Valencia CF won and he got some money.

Anyways Valencia CF did not start the match too convincingly, in fact Bilbao had most of the possesion, but also an early chance in the 3rd minute when an attack from the right side started after Bruno shifted position when a pass was sent towards him.

Bilbao kept pressing and had another chance in the 7th minute, but Valencia CF goalkeeper Vicente Guaita made a wonderful save to keep Valencia in the match.

Valencia's defense was shaky to say the least and in the 13th minute after a mistake by Stankevicious and then Navarro, Llorente managed to score for Atletico Bilbao.

Valencia CF tried to reply and had the first real chance in the 20th minute when Pablo released Joaquin alone in front of Bilbao's goal, but he somehow managed to dribble himself and screw the chance.

Bilbao had few more attacks and one chance in the 35th minute, but nothing serious and then only a minute after in a rare Valencia CF attack Pablo had a shot towards Bilbao's goal.

Then in the 42 minute Atletico Bilbao had a wonderful chance in which Lopez released a shot, but Guaita was in place to save. A minute previously Valencia CF had a penalty claim that the referee ignored.

Pablo was really active in this first half and all of the chances came through him and he also had the final shot for Valencia in the 44th minute, but couldn't really do damage.

Just before the end Guaita made a bad pass, Muniain got the ball, then passes to Llorente, but he was blocked by Stankevicious in what was probably the only good defensive move in the first half. 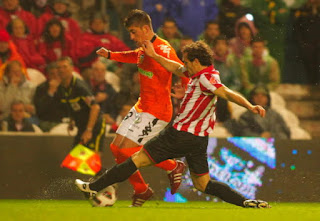 Second half started much like the first, though Bilbao was visibly more relaxed and content with their result, which will ultimately prove costly for them.

Bilbao had few chances in the first 15 minuted, a header, a shot towards Guaita, but nothing too serious.
Toquero had a dangerous dribbling in the 62th minute and managed a shot, but only to Guaita, who was once again alert and caught the ball. 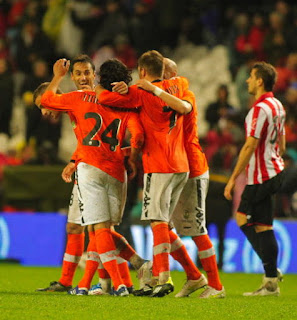 And then in the first real chance for Valencia in the 70th minute, Soldado made a nice back pass to Joaquin who finally made a decent cross which found Mata, this oe shot and scored. It was Atletico Bilbao 1, valencia CF 1. Valencia CF managed to draw and everyone in the Valencia CF camp could breathe easier.

Ever Banega went out for Tino Costa and the match changed for the better for Valencia CF.
First Joaquin combined well with Tino who shot towards Bilbao goal, but just couldn't penetrate the goal, but in the second try in the 80th minute Tino released a powerful shot which Iraizos could only reflect to the oncoming Jonas who easily slotted the ball in the net, it was 2-1 for Valencia.

The final 10+5 minutes were mostly Bilbao attacks but Valencia CF managed to last and ultimately win.

Player ratings:
Guaita 8 - Made 2 wonderful saves, plus a few more less wonderful, but equally important saves.
Bruno 5 - Had trouble keeping Muniain in check and more often than not was beaten.
Navarro 4.5 - Not an assuring performance from the captain. He and Stankevicious made a mess of Llorente's goal.
Stankevicious 4 - Bad in defense, but was also let down by Mathieu who should have been more back, since he wasn't really doing anything in attack, except standing around.
Mathieu 4 - Probably the weak link in defense tonight, Stankevicious had to cover each and every time for him and didn't really offer much in attack either.
Topal 6 - Somewhat efficient in his defensive duties, marked Llorente on set piece balls, but did a poor job at it. Had very little understanding with Banega, but generally useful.
Banega 4 - Nothing positive tonight. He could not control the proceedings, lost quite a bit of balls and rarely linked up the midfield and attack.
Joaquin 6.5 - First half performance was poor, but improved immensely in the second and his direct running caused Bilbao defense a lot of problems, made the assist for the first goal.
Mata 6 - Barely visible in the first half, improved a little in the second half, but other than the goal wasn't very influential.
Pablo 6 - Was the best player in the first half for Valencia, mysteriously substituted in the second half.
Soldado 4 - Frustrated from the 1st minute to the last. Made one great move though that kick-started the whole action that led to Mata's goal.
Subs:
Jonas 6.5 - Made the difference between a draw and a win. At the right place and the right time to score after Iraizoz reflected a powerful Tino Costa shot.
Alba 5 - Better than Mathieu, though had one lapse when everyone went forward to create a offside trap, but Jordi went backwards, lucky that Valencia did not concede a goal at that moment or his career could have been over.
Tino Costa 7 - Really spiced up Valencia's play, made two trademark shots, one of which Iraizoz could not manage to catch and the reflection ended up to Jonas who score the winning goal.
Posted by SlickR at 11:46 PM
Email ThisBlogThis!Share to TwitterShare to FacebookShare to Pinterest
Labels: match report, results
Newer Post Older Post Home