Here are several updates that had happened in the last few days: 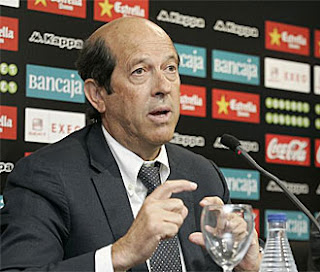 Valencia CF president Manuel Llorente has called an emergency meeting of the whole Valencia staff behind closed doors. This includes the coaching staff, sports staff, fitness staff and club doctors.
The rumor is that they are going to talk about transfers and the state of injured players, but I suspect its going to be more than that.
Best bet would be they will talk about transfers in the winter market, as well as the next season squad, but also talks about the current conditions of the players and level of play.
Considering Fernandes, Banega, Pablo, Chori have gained weight and Mathieu's recent stamina issues and several injuries I would guess the president is not pleased with the condition of the players and there will be talks to fix the situation fast.


Next on the list is the possible contract extension for Vicente Guaita, Valencia's current first goalkeeper. He has been in impressive form so far covering for the injured Cezar and Moya and with the failure to sign Diego Alves from Almeria the staff offered Guaita a contract extension that would see his current contract extended to 2014 and of course a salary increase. Nothing has been signed though and there are weeks, if not months of contract negotiations.

Last but not least is Valencia's coach Unai emery future. There has been a lot of talk recently and a shift in opinions regarding the future of Unai emery at the club, after the recent loss to Villarreal in the Copa Del Rey.
Unai Emery signed a 1 year contract extension last season and this means his future is not safe at the club.
With more and more people raising their voices against Unai Emery its no surprise that there is a lot of speculation and uncertainty about his future and if he should lead the team next season.
Manuel Llorente recently denied any speculations, but did not want to engage in talks about next season coach.
Anyways the biggest measurement if Emery is going to renew his contract with Valencia will be the results, for now the objectives are third place finish in La Liga and going past Schalke in the Champions League and as far as possible.
Posted by SlickR at 3:35 PM
Email ThisBlogThis!Share to TwitterShare to FacebookShare to Pinterest
Labels: news
Newer Post Older Post Home