What a match. Full of surprises and thrills from start to finish. Valencia CF won against Espanyol by 2-1 with all goals scored by Valencia players. It was a bit excruciating to watch towards the end thinking that Valencia lost yet another 2 points in what should have been an easy victory, only for Mata to score a whirlwind of a goal and get Valencia all the 3 points. 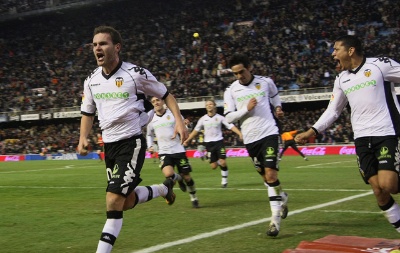 Valencia started the better of the two teams and immidiately started dictating the match. Pablo had a few good runs at the start and Joaquin on the right side provided 2 crosses, but no one really could make much of it.
The midfield was working great and Topal after coming from injury and not having played for so long was having a good match as he was always recieving and spreading the ball around, while Maduro acted as a more defensive midfielder.

After a few missed opportunities or scrambled attacks Valencia got a corner. Joaquin was the man who took the corner and managed to found Aduriz who headed the ball past Kameni and it was 1-0 for Valencia CF.
Valencia continued to pretty much dominate the match, but towards the end Luis Garcia passed Mathieu and made a cross only for Ricardo Costa to head the ball into his own net. Guaita wasn't careful as well and the ball easily went into Valencia's net and Espanyol were back in the match. 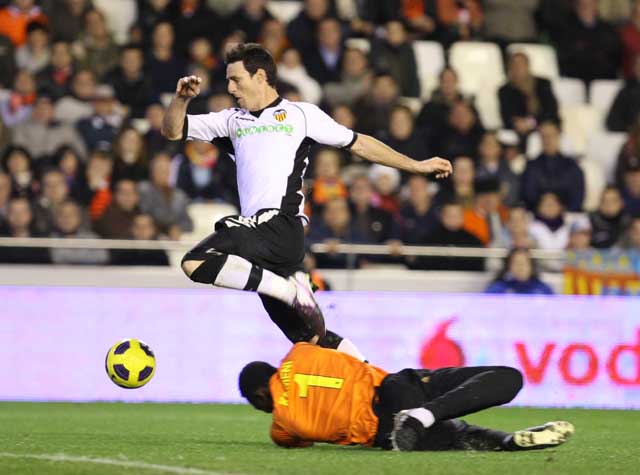 The Second half started and now Espanyol were a lot more organized and dangerous, probably boosted because of the New Year's gift Ricardo Costa gave them.

As Joaquin was leaving the pitch and Vicente entered, Aduriz made a stupid and irresponsible move and earned a red card and it was not the referee's bad call this time, as the red card was fully deserved. With such an disadvantage it proved hard to attack and Valencia's chances were spare, although Espanyol's defense and goalkeeper made some serious mistakes that Valencia's players couldn't convert into goals. 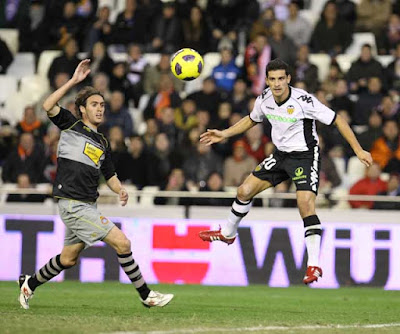 Towards the end Pablo and Mata had few other small chances, but nothing concrete or dangerous. Injury time started and just as the match was about to end Pablo made a good cross towards Espanyol's penalty area and found Ricardo Costa who headed the ball towards Mata and luckally Mata managed to score in the 2nd minute of the injury time.

Overall an interesting match and one that looked a lot like last years one between these two sides in which Zigic scored a goal exactly in the same way and in the same time as Mata scored tonight.

Player Ratings:
Guaita 6 - Made one good save in the first half and that was the most he had to intervene, but was a bit distracted when Costa headed the ball into his own net and should Guaita have been more concentrated he could have catch the ball.
Miguel 6 - Good defensively and helped out in the midfield, but was limited in his offensive runs.
Stankevicious 8 - His best defensive display and one of the best of any defensive player this season. Made numerous saves and tackles and was rock solid at the back, covering for the shaky Costa.
R. Costa 5 - Would have had a worse mark, but made the assist to Mata that lead to the winning goal. Overall he missed tackled, lost his mark and had an own goal, match to forget for him.
Mathieu 4 - Awful performance from the French. Lost way too many battles and didn't contribute much offensively either. Seems like he lacks the strength and stamina to do anything and still has troubles marking his man.
Joaquin 7 - Not the best display, but he had few good crosses and took the corner kick that led to the first goal.
Topal 6 - Very good performance in the first half and managed the gameplay greatly, but lost a lot of intensity in the second half probably due to low fitness after such a long injury and having not played a match for so long.
Maduro 6 - Put in a more defensive display tonight than Topal and covered for the defense in good and timely fashion, but went off the radar for too much of the match at times.
Pablo 7 - Good display tonight and although he had few sloppy dribbles and seems kinda of slow, he always found himself in dangerous positions and bothered the Espanyol defense a lot.
Mata 7 - Scored the winning goal and even though he seemed to fall a bit too much when touched, he had a few good moments and had few assists that other players couldn't make them count.
Aduriz 6 - Would have had a rating of 8 or 9 this match as he played superbly until his stupid move that got him the red card.
Subs:
Vicente 6 - Slow start for Vicente as he too has not been getting too much playing time, but grew into the match and made couple of good crosses and passes. Defenately brought some danger to the left side.
Banega N/A - Average display, though did not have much time to assert himself into the game.
Bruno N/A - Not enough time
Posted by SlickR at 12:31 AM
Email ThisBlogThis!Share to TwitterShare to FacebookShare to Pinterest
Labels: match report, results
Newer Post Older Post Home