Valencia CF finally won in a well played match and is keeping up with still in 3rd place Villarreal. The play was amazing and direct, with every player knowing its position and movement and almost everyone played great.
I was also absolutely spot on at my result prediction as Valencia won 2-0. 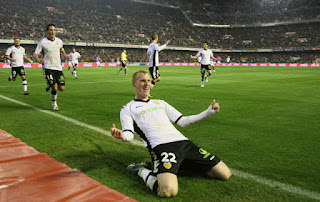 The match started with Valencia CF in possesion and dictating play, but that was to be expected and it was clear that Deportivo La Coruna is going to defend and will be more than happy to get away with a point.
The midfield duo of Ever Banega and Hedwiges Maduro functioned very good and Valencia was keeping possession and the passing was mostly accurate.

Right from the start Pablo and Vicente were very dangerous on their sides and the majority of actions started and ended with them. Mata was also linking up very well with Pablo and Vicente and coming back to play them on and then running back to Deportivo's penalty area.

Miguel and Mathieu were also very active in going forward and with Maduro covering at the back the play was solid and stable. The only player that was clearly lacking was Soldado as he continuously scrambled good balls coming towards him and was very nervous from the start.

Deportivo got bombarded from the flanks with Vicente and Pablo with the support of the full backs were constantly creating chances and Mata with his running was creating spaces for Soldado or someone else to use.
With all the attacking play going on Valencia just couldn't break Deportivo and the first half ended 0-0. 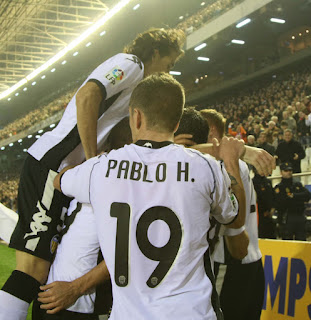 In the second half Deportivo decided to start playing and was gaining back some control of the match with several attacks down the left wing. On one counter attack the defense did not mark all Deportivo players and someone made a great shot towards Valencia goal, but Guaita was ready and made a superb save to keep Valencia level.

Valencia has a lot of chances in the second half also, more than I can remember and especially Vicente and Pablo were wrecking havoc to the Deportivo defense. Pablo, Mata and Soldado has a shot at goal, but it seemed like nothing Valencia did can go in.

Maduro made way for the returning Tino Costa and soon after Ever made way for Topal. Tino was clearly lacking form as he made several bad passes and allowed Deportivo to go on the counter, but he always got back and win the ball back redeeming himself for the danger he created.
After few bad passes than came a superb pass by Tino Costa that found Mathieu on the far left side of the goal, Aranzubia came jumping towards Mathieu but Mathieu's shot past the goalkeeper and went into the net.
Valencia finally got the lead and it was Mathieu who scored the goal in the 77th minute. 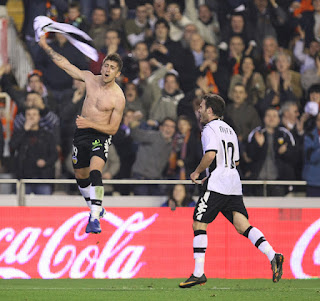 The match was not over though and Deportivo tried to get back in it and started to attack. After a few messy and heart stopping situations in the Valencia penalty area, Valencia gained back some control of the midfield and mounted a few counter attack.


Somehow in stoppage time the ball got towards Mata who luckally got past two Deportivo players and ran towards the goal, with Pablo and Soldado ahead of him. Mata than passed the ball towards Pablo and again Deportivo goalkeeper left his goal and jumped toward Pablo, but this one made a nice right move avoiding the goalkeeper and shooting in the empty net, it was 2-0 for Valencia just as the match was about to finish.


Player Ratings:
Guaita 7 - Did not have much to do, but made a wonderful save in the second half to keep Valencia level with Deportivo.
Miguel 7.5 - One of his best matches no doubt about that. Great in defense and amazing in attack, linked up well with Pablo and his passes were mostly dangerous.
Stankevicious 7 - Solid at the back and responsible for stopping several Deportivo attacks.
Dealbert 6 - Not as good as Stankevicious and had few lapses, but generally good considering he was also covering a lot for Mathieu's involvement in attack.
Mathieu 8 - One of Mathieus best matches and one long overdue. Somewhat missing in defense in the second half, but superb offensively and had good understanding with Vicente. Scored the first goal that essentially won the match for Valencia.
Pablo 9 - Rarely put a foot wrong, his passing was impeccable, his running dangerous and created a ton of chances for his team mates. This kind of play we would like to expect from Pablo in the future also.
Banega 6.5 - After a disappointing season that let a lot of fans down tonight he showed he still possess great skills and was mostly good with the passing, run well and got involved in few attacks. His best moment being the pass towards Soldado just before he was substituted. Made a few errors in the second half though that lower his score by 0.5 points.
Maduro 7 - Great defensive display and covered the whole field and helped out constantly at the back and break up Deportivo's play in the midfield. Also had a good involvement in attack.
Vicente 7.5 - Performance that remind us all of Vicente past glory and how he can be a superb player on his day. These kind of performances will have his contract extended and he showed that he still has fight left in him. Great play all match long, some amazing passes with Mata and a menace on the left wing for Deportivo.
Mata 8 - Somewhat disappointing start to the match as he started slowly and clumsy, loosing few balls and making the wrong decisions, but improved enormously as the match was progressing. He started linking up well with Pablo and Vicente and was actively engaged in most of the attacks. Had a shot on goal and poped-up in every spot. Started the counter attack for the second goal and made the assist to Pablo.
Soldado 3 - Frustrating performance from a frustrated man. For some reason he started the match frustrated and from start to finish he was always frustrated. Every pass, move and shot he made was either bad or the wrong choice in that situation. He seemed like a second division average striker tonight.
Subs:
Tino Costa 7 - Came in for Maduro and slotted well immediately, but made few bad passes that resulted in Deportivo attacking, but raced back to defense and won the ball every time redeeming himself. Made a superb pass to Mathieu that lead to the first goal.
Topal N/A - Not enough time, but did well to win back some balls although not involved in much of anything.
Alba N/A - Not enough time.
Posted by SlickR at 7:48 PM
Email ThisBlogThis!Share to TwitterShare to FacebookShare to Pinterest
Labels: match report, results
Newer Post Older Post Home