Racing Santander will host Valencia CF at El Sardinero tomorrow in what will be another crucial match for Valencia CF.

Racing Santander has two losses and one draw in the last 3 matches and is currently sitting 16th on the table with only 20 points, just 2 more above relegation zone clubs.
The main threat for Valencia CF will probably be Markus Rosenberg, Racing's top goalscorer with 5 goals.
Racing have scored a total of 15 goals in La Liga, but have received 29 goals, though they are still one of the best defensive sides in the bottom 10 clubs.

Only thing going for Racing is their good form in their home stadium where they have not been beaten since last September.

Tono had this to say when interviewed about the match against Valencia CF: “Against Valencia CF, we must keep our good results at El Sardinero stadium, where we’ve added quite a lot of points and have been scored just a few goals. That’s the way we must go on”.

Racing Santander squad: to be announced...

Valencia CF on the other hand are on a winning streak of 5 matches in a row and haven't lost in the last 6 matches in La Liga. Valencia CF managed to somehow continue its streak last weekend against Malaga with a bit of luck and refereeing decisions going in its favor, but the play wasn't really great for the Valencia CF fans, maybe for the neutral viewers, but not for anyone else.

Since the match against Malaga Valencia CF has purchased Brazilian striker Jonas from Gremio for 1.2 million euros and he should complete our attacking options, as previosly Valencia CF had only 2 natural strikers with Soldado and Aduriz. Jonas won't feature in tomorrow match as he is yet to fully complete his transfer, but should be available for selection next week. 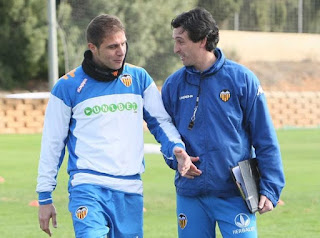 After the big defensive mistakes suffered against Malaga, Emery has been working on tightening up the defense and practicing R. Costa and Stankevicious in a partnership and Dealbert with Navarro as the second partnership in short match practices.

The biggest problem would be who to choose for the midfield roles after last weeks obvious problems in the midfield as well. Does he start Tino Costa or Ever Banega in a more advanced midfield role and the second choice would be to either start Topal or Maduro in a defensive midfield role.

Vicente is injured for almost two weeks now and Mata was injured in training after a collision with Navarro. David Albelda, Cezar Sanchez and Moya are still injured, though the two goalkeepers are slowly recovering and I wouldn't be surprised in they are fully fit in a week or so. Dealbert has been left out of the squad after last weeks miserable game.

Anyways you can expect a tough match in which Racing is going to play mostly defensively and will try to get a draw in order to continue their good home and form and Valencia will search for a win in order to get away from either Espanyol or Villareal, as tonight these two clubs are playing each other and one is bound to loose points.

Valencia CF Technical:
Formation: 4-4-2
Line up: Guaita; Miguel, Stankevicious, R. Costa, Mathieu; Joaquin, Topal, Banega, Pablo, Soldado, Aduriz.
Tactics: High frequency crosses from the right wing, low defensive line, medium opposing team pressure.
The biggest change in tactics would be the defensive line and in this match it will be set to low in order to tighten up the defense and allow the defensive midfielder to fall back faster and be able to more effectively break up opposition attacks. With Vicente and Mata injured, Pablo is probably going to play on the left wing, but he will also be free to roam the field in attack and at times even play as a creative midfielder just behind the attackers.

Result prediction:
Racing Santander 0-2 Valencia CF
I can see Valencia CF winning this match and anything less will be considered a failure, especially since Racing is fighting for survival. If Valencia is able to play good football with good ball possession and iniciative I can see Valencia winning 2-0. Its not going to be easy though as seen from the past matches  and if Racing put enough pressure we may concede a goal.
Anyways I strongly believe will see a better game from Valencia and we should be able to win.
Posted by SlickR at 6:25 PM
Email ThisBlogThis!Share to TwitterShare to FacebookShare to Pinterest
Labels: match preview
Newer Post Older Post Home