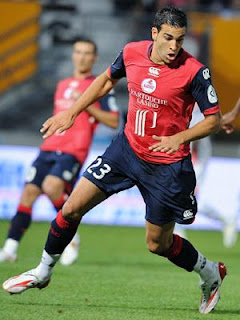 He will stay on loan with Lille for the remainder of this season and will join Valencia in the summer when the season ends.

Adil Rami, 25, has signed a contract with Valencia that will keep him in Valencia until June 30, 2015.

Its believed that his signature may have cost Valencia as much as 10 million euros, though its more likely that Valencia has signed him for less, though the official sum is undisclosed.

This is of course a great signing for Valencia as Rami is a solid central defender and has also featured in the French national side, though Lille's goals taken is not that good right now and even though they are currently first place in France first division they have taken 21 goals.
Posted by SlickR at 7:15 PM
Email ThisBlogThis!Share to TwitterShare to FacebookShare to Pinterest
Labels: official transfers
Newer Post Older Post Home