Official: Sunny loaned out to Numancia 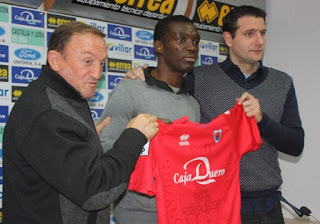 Sunny was loaned out to Numancia for the remainder of the season. This is good news for Valencia and mostly the player, as he was left out of the squad and training sessions by coach Unai Emery and he has been training alone for more than 6 months now.

Sunny is a midfielder with Nigerian origin, but also has a Spanish passport and even played for Spain's U-21 squads a few times.

The player was excited to complete this loan move and is ready to commit to Numancia and show what he is capable for. Numancia president Francisco Rubio thanked Valencia, Sunny, and his representatives for making the deal happen and hopes that Sunny can rediscover his old form.

Sunny was once considered a huge talent and a rising star and that is why Valencia purchased him, but he had fallen out of favor with the coach and has not featured for Valencia for two seasons.
Posted by SlickR at 7:38 PM
Email ThisBlogThis!Share to TwitterShare to FacebookShare to Pinterest
Labels: news, official transfers
Newer Post Older Post Home