How should Valencia CF improve its shortcomings?

I don't have the time to analyze the whole season for now, although I'm going to take the time in the future, but for now I'm just going to analyze the Malaga match and draw some conclusions on how to improve aspects of Valencia's game.

As you can read from the match report Valencia had a dreadful first half, was outplayed by a 10 men Malaga and they managed to score two goals.
In the second half things improved, but Malaga was still playing with a men down and 20 minutes later with only 9 men.

The main problem was in the first half and although Valencia received a goal in the second half with 2 men advantage it was more of a unlucky circumstances and individual mistakes.

When the match began the 2nd minute told me everything how this match is going to be played out. I lost the pre-match confidence and I knew we were going to be defending and tracking the ball, instead of dominating the game and setting the path of the game.

The weakest source was Valencia midfield as Tino Costa and Maduro failed to keep possession and regain possession when we lost the ball quickly.  The primary job of a defensive midfielder is to break opponents play by either winning the ball back and regain possession, or make a tackle with or without a foul to give the defense time to organize.
Maduro as a defensive midfielder failed miserably to do any of these things and all he did is mark opposition players, but without putting pressure on them or making strategic tackles. If you watch only Maduro's moves you'll easily see that his decisions were mostly wrong, depending on where he was on the field at the time of the decision he made.
For example tackling a player 25 meters from goal is considered bad, as he gives away a free kick to the opponent in a close and dangerous area. Another example would be not tackling the opposing player few meters after the half line on Valencia's side of the pitch.

The job of Alberto "Tino" Costa is to keep possession, pass the ball around and be available at all times to receive the ball, only in order to bring it back into circulation. In few occasions he can make a dribble or go to the wings to support the attacking players.
For example you don't see Xavi from Barcelona dribbling or going to the wings or making too many direct passes, because his job is to keep possession and circle the ball around so that other players can exploit a possible opening. He will sometimes put a through ball from the center or make a cross when there is a real chance to make an assist or threaten the opposition goal. 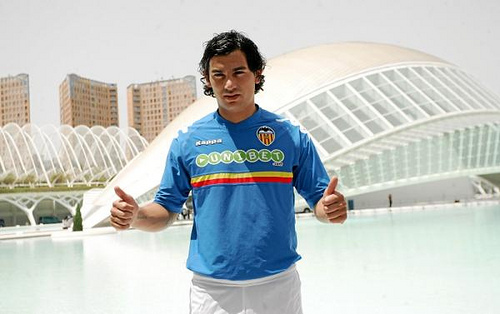 Tino Costa did everything wrong and everything he is not supposed to do. He made several inaccurate passes, dribbled too much and often went to the left wing to support the attacking players when he just shouldn't have, as this created huge space in the middle for Malaga to exploit.

When Malaga was one man down is the prime example of Tino's wrong moves, as instead of Valencia gaining possession, Malaga was still the team with more possession and constantly attacking.

Tino Costa is by nature a more attacking midfielder or AM, as he can dribble, shift position and make a dangerous pass. He is not a natural deep laying midfielder or a playmaker and this is really exposed in matches where the opponent tries to control the ball and this is why Valencia loose possession.

Banega is a player suited for the playmaker role from a deep laying midfield position as he spreads the ball around, makes himself available to receive the ball back and then passes the ball again. There are moments when he will dribble or push forward, but usually he keeps his position back in the midfield and this is why it works for him.
Last season with an experienced and great defensive midfielder like Albelda who can break up opponents play, make a foul at the right time it worked so good. Even if Banega was out of position on rare occasions and Valencia lost the ball, Albelda was there to intercept and make the right move to cripple and stop the opponents.

Of course Tino has been generally playing well this season and this is because weaker teams or teams who don't try to control the ball and attack on the counter, his shortcomings are not exposed and he can in those matches make a move or a pass that has a positive result.

Another disadvantage is that Valencia lack a true leader on the pitch. While Miguel and Joaquin may be a captains they lack the leadership skills that Albelda has. Even Vicente lack those skills and the two players that have these leadership skills are Cezar and Albelda.

If you watch matches when Cezar was on goal you can see that the defense is a lot more stable and calm. They don't do stupid mistakes, don't get disorganized, because they know they can fall back to a stable and reliable leader on the goal. This is what our current young goalkeeper Guaita lacks and he probably won't have until he is 32 years of age.

Albelda is the other example case. With him as a defensive cover the defense is again much calmer and stable, as they know that in front of them in an experienced leader that is going to make the right move to help out the defense.

With Albelda and Cezar injured there is absolutely no leader on the pitch and what Valencia this season lack also from the previous one is a top, top player like Villa was. David Villa was so good that people relied upon him to make a miracle and score a goal, saving Valencia from a defeat or a draw and Villa was actually more than capable of doing such things. He will move from the left wing towards the opponents goal, dribble past two defenders and score a goal from a 90 degree angle.

Right now neither Aduriz or Soldado are capable of such feats and in the whole squad there isn't a top player that adds and shares that aura of greatness that players will feel.

What Valencia is trying to do is positive and its a future project of bringing young and talented players to the squad, but its also the case Arsenal for example have won the title so little, apart from the two seasons where they absolutely dominated in the Premier League. Also don't forget that at that time they also had Denis Bergkamp, Thierry Henry and Vieira.

Every team that wants to be a competitor for a title must have these experienced and leader material players to fight for top honors. Valencia right not only has Albelda and Cezar and when the season is over its possible it will loose both.
With no top player also its even more crippled and there is always that sense of vulnerability.

So what can we conclude out of all this? Well we can conclude that Valencia needs Albelda and Cezar back, even if they are only on the bench or training sessions and Valencia need to buy or create a top player to share his aura of greatness around the squad.

You need a team of great mixture of strengths to cover for the apparent weaknesses. This is of course the job of the coach to find the "perfect" starting eleven and players that work best when fielded together.

Valencia has a weaker defense, so make sure you cover it with great possession football play and a stable defensive midfielder that can really help out in troublesome situations. I don't have the perfect formation since I only see the team play on official matches and I'm not in all those training sessions, but Unai emery must look deeper than before and find out exactly which players and where are most efficient.