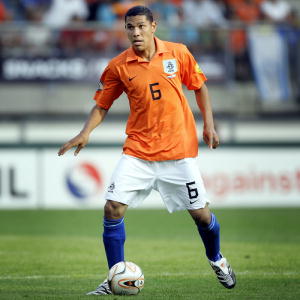 Ever Banega started the match for Argentina in what was a pretty dull match against Brazil that ended in 1-0 victory for Argentina after a solo Messi run and goal in stoppage time.
Ever Banega played the full match and he had a good performance alongside Mascherano as they seem to form a good defensive line for Argentina, that is really tough to brake. He could have done better in attack, but considering he wasn't getting too much playing time in Valencia he seemed a bit rusty in that regard.

Hedwiges Maduro started the match for Holland in a defensive midfield position and played for about 85 minutes, before being substituted. He played a good match and actually provided the assistance to Huntelar for Hollands only and winning goal. He was a bit unsure in the closing periods when Turkey started attacking and needs to gain some confidence, but considering he is coming from a injury just 10 days ago it was a great performance for Maduro.

Manuel Fernandes came on for Portugal in the 60th minute in what was a really exciting match in which Portugal just trashed Spain like they were playing against school yard kids and not the world champions. Portugal won 4-0 over Spain, as Spain hit a new kind of low. Manuel Fernandes played okay in the time he had, he wasn't very influential and lost few balls in bad situations, but corrected his mistakes and made a few decent runs and passes.

Those were the only called up Valencia players for international duty and Vicente Del Bosque may be kicking himself in the head right now why he didn't call Aduriz and Pablo, especially since Navas is injured and Mata was also injured, so there were at least 2 free spaces in the team.
Admitedly Pablo hasn't been in form for Valencia, but he has been performing good for Spain every time he plays.
Posted by SlickR at 12:32 AM
Email ThisBlogThis!Share to TwitterShare to FacebookShare to Pinterest
Labels: news
Newer Post Older Post Home