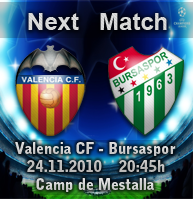 
Winning the next match in the Uefa Champions League against Bursaspor will mean that Valencia qualify for the round of 16 in the competition. Valencia have the chance to ease its troubles and put the next round qualification to rest if they just win tomorrow against Bursaspor.
Valencia will also qualify if Rangers lose to Manchester United and we draw with Bursaspor, but that would also mean a lot of criticism towards the team and coach, as well as less money. Winning in the champions league actually brings additional money to the clubs and with Valencia's dire situation we need every penny we can get.

Valencia first match in the champions league was against Bursaspor and Valencia managed to win easily by crushing Bursaspor four to zero. It was extremely one sided match where Valencia dominated in every regard and managed to get a successful victory. Since the loss to Barcelona though Valencia just can't seem to shake off a string of bad results. Valencia won in the copa del rey, only to loose from Sevilla and then winning against Getafe and this week drawing with Villareal, so much have the results varied and the team playing inconsistently.

This match should be easier though and Valencia shouldn't have any trouble taking this one in the bag. Having said this I'm preparing for the worst. With such inconsistency its hard to predict how one match will turn out.

Bursaspor on the other side have lost all of their matches in the champions league, but each time they have improved tremendously and their last match against Manchester United, they only lost by 1-0. No doubt they will come into this match much improved and will be fighting to at least go away with a point from the Mestalla. They have not been doing too great in their domestic competition, but shall present a threat to Valencia nevertheless.


Ricardo Costa, Valencia player
Ricardo Costa had the usual talk in a press conference ahead of the match against Bursaspor. He talked about how important this match is, how Valencia want to win and as always asked for the fans to show up at the Mestalla and support them.

Official Valencia squad:
To be announced...

Valencia had all players, except Mathieu available in the last training, but its still not known if Miguel, Topal, Mata and Alba are fully fit to play.
What is certain is that Mathieu is unavailable due to injury and Stankevicious can't play in the Champions League for Valencia.

Official Bursaspor squad:
To be announced...

There is no point defending and we need to secure a victory in this match so that is why Emery will probably go for a 4-4-2 formation and the fact that Chori hasn't been in good form to play behind a striker in a 4-2-3-1 formation. The tactics will also be same as always with mostly crosses from the wings in Bursaspor's penalty area and high defensive line to keep the pressure.

Result prediction:
Valencia CF 3-1 Bursaspor
I expect a victory and nothing else. I can't be too confident and I'm preparing for any result, but I think Valencia has enough quality to win this match and score 3 or more goals, the question is do we receive a goal also. Its a tough question and we will probably concede some stupid goal, but ultimately winning in a good fashion.
Posted by SlickR at 12:08 PM
Email ThisBlogThis!Share to TwitterShare to FacebookShare to Pinterest
Labels: match preview
Newer Post Older Post Home