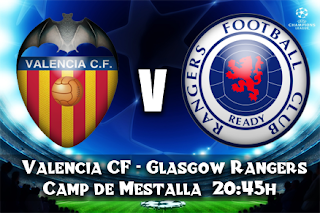 Tomorrow is the biggest match in the entire season and I know I said this is one of the most important matches many times, but this really is THE most important match of the entire season period.
A loss or a draw and our chances of going through the Champions League group stage would almost be lost, we would have theoretical chances of going through, but I wouldn't count on it. On the other had a win and we would be almost sure to qualify. Qualification doesn't mean just sporting success, it also means financial success, this year Uefa is giving out the biggest money prizes in the history of the Champions League, each win, each match and each additional round brings a lot of money to the clubs. Considering Valencia's dire financial situation we need every last drop of cash if we are to be a stable and powerful club, like all of us desperately want.


Valencia play their most important match in the entire season tomorrow at the Mestalla and only a win will be success as it will open up the path for continuing after the Uefa Champions League group stage.
Valencia are on a series of bad results, the latest match a draw at home against top bottom Zaragoza, previously a loss to Mallorca at home and ultimately only 4 goals scored in 7 matches. If the opposing teams did not score own goals, we would have probably lost the games against Rangers and Mallorca.
With such high importance matches and of course such important competition we simply need to win and to qualify at least in second place in the Champions League.

Rangers on the other side are also coming from a 1-1 draw at home against Inverness Caledonian Thistle FC. Rangers are first in their domestic competition though with 28 points, 1 point above Celtic and huge 12 points lead over third placed Motherwell.
Rangers defensive line is their strongest unit, with only 9 goals received in their domestic competition and only 2 in the champions league.
Overall they are a very solid side, who play compact football and as a team, with a great coach.

It is a very important game for both teams. We are at home and our job is to play well and win. We want to play good football and we want our fans to enjoy it and leave the stadium happy. We have to make them feel part of the victory. I am hoping for the best-case scenario – a victory in a big Champions League game.

Walter Smith, Rangers manager
It is a very important game and both teams are aiming for second place. Valencia are at home and have a slight advantage. Looking at Valencia's latest results they may be missing players like David Villa, but is a matter of time before they make up for that.

We are under some pressure because we have not experienced this sort of situation before, but we hope this pressure will not stop us getting through and going as far as possible in this competition.

Joaquin Sanchez, Valencia player
In a official press conference Joaquin stated that the group C is quite equal and competitive, but stressed that Valencia is solely responsible for its results and must look at its own play.
"There are many possibilities how the group will turn out, its an open playing field, but we depend on our selves and we know three points are a must in tomorrow's match against Rangers."
About the outcome of the match Joaquin said that he doesn't want to predict the result, but he said the team thinks positively and that the players and coach are calm and optimistic before the match.
He also called the fans to show up at the Mestalla and create a burning atmosphere in order to help the team win in this important match.


The biggest name on the list is defensively Cezar who returns after an injury, he has recovered quite a while back, but has been working on his fitness. The biggest exclusion is probably Chori Dominguez who seems to be falling out with the coach, after not performing to the required standard. Feghuoli is injured, Stankevicious


Rangers FC Official squad list:
None available
Vladímir Weiss (heel) and Maurice Edu (calf) are injury doubts for Valencia match and may not feature in the starting line-up.

Valencia CF Technical:
Formation: 4-2-3-1
Line up: Cezar; Miguel, Navarro, R. Costa, Alba; Joaquin, Albelda, Tino, Vicente, Mata; Aduriz
Tactics: High frequency crosses from the wings, positional changes from the 3 attacking midfielders, high defensive line and opposing field pressure, deep zone defensive midfielder, long shots.
I don't think much will change tactically from all of the rest matches, its still going to be mostly crosses from the wings, though Emery will probably ask the wingers to try to penetrate to the opposition penalty box when given the chance.
As far as the line-up I have absolutely no idea which players Emery will field, I think the mentioned above are the most likely, but I really am curious as to what players Emery is going to choose.

Result prediction:
Valencia CF 2-1 Rangers FC
Rangers proved that they can hurt us and penetrate our defense on more that one occasion when we played against them at the Ibrox, and our defense has recently been very shaky, so I expect Rangers to score a goal. I hope we are going to win and that's why the 2-1 scoreline, we haven't been scoring many goals lately and have been were uncreative and weak in front of the opposition final third. Hopefully Emery has some hidden powerful tactics and effective trainings methods to turn in around in few days and get Valencia players able to create chances and score. Really whats going to be important is scoring a very fast goal, it will allow us to play better and calmer and wait for our opportunities.
Posted by SlickR at 10:22 PM
Email ThisBlogThis!Share to TwitterShare to FacebookShare to Pinterest
Labels: champions league, match preview
Newer Post Older Post Home