Hugo Almeida to transfer to Valencia? 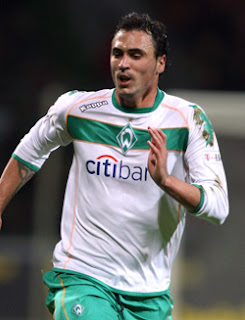 There has been some reports that Werder Bremen striker Hugo Almeida may come to Valencia, since his contract ends next season. It has been suggested that talks may start as soon as January and this is Valencia's primary target.

Bogus or not?
Well first of all he fits the bill rather nicely and thus so much speculation about it. He is going to be our of contract, so he will come free, Valencia need a 3rd striker, because we now have only two and if one gets injured we are going to be in trouble, so this fits also. Hugo Almeida is also experienced and has proven to be really good, but here comes the problem. Already with two good strikers I don't think there is a place for a third good one. Someone has to sit on the bench and with the competition already quite high with mostly 1 starter starting due to our formation, that means one has to sit as a reserve at least in one match per week.
If we are to bring a 3rd striker its most likely going to be a second rate striker, someone who is going to sit on the bench and only play in the required circumstances.

So yes, I believe this to be a bogus report, and also the fact that we have two amazing young talents waiting to come to Valencia first ranks in Isco and Paco. He would be a great signing in any other case, but not in these circumstances.
Posted by SlickR at 6:52 AM
Email ThisBlogThis!Share to TwitterShare to FacebookShare to Pinterest
Labels: transfer speculations
Newer Post Older Post Home