Something isn't right, that's for sure and only 4 goals(1 from penalty) in 7 matches is not good, not good at all.
So lets take a closer look at the 4-2-3-1 formation, player positioning and movement and how come no player can create chances and opportunities for goals. 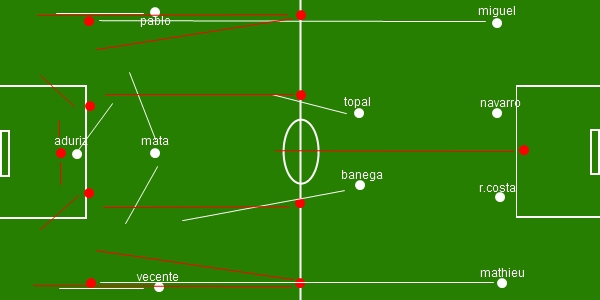 Lets take a loot at the above position, these are the positions of the players and the red and white lines represent the movement when Valencia have the ball. For a 4-2-3-1 formation this is good starting position and good transformation, so nothing worrisome here.
We can also see that Zaragoza are playing 5-4-1 and in general when transforming in defense its actually 10 players defending. 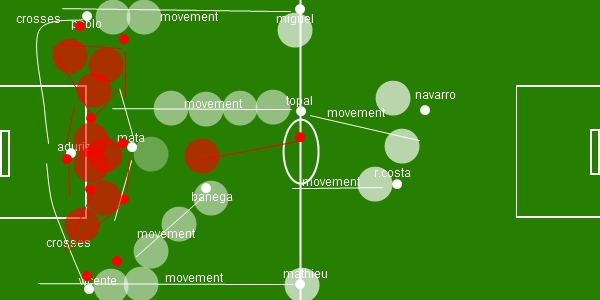 As we can see in this picture this is the transformation into attack and where players mostly position themselves and their movement in order to create spaces and opportunities towards the goal. The red and white dots represent the density of players from each team, red is for zaragoza and white for valencia.
As we can see, since they are playing 5-4-1 its very dense between Aduriz and Mata in the center, their midfield players act as their first defensive line and their position as shown by the red lines. As we can see with Valencia players movement vs Zaragoza players movement its very dense and seemingly impossible to crack down and thus we are left with opportunities from crossing, but here is part of the problem. Since Aduriz is the sole attacker he is in no position to fight against 3 defenders all surrounding him, due to Mata's small stature Emery is not playing him in the opposition penalty box and thus he moves towards Pablo and Vicente to receive the ball and than immediately return it.
Mata is no playmaker and does not have the vision that say Xavi from Barcelona has and his position and movement don't represent any threat to Zaragoza. Whats more Pablo and Vicente are always easily doubled, since there are no close Valencia players - namely Banega and Topal nearby to recieve the ball and possibly make a dangerous move or pass.
The support to the wingers comes from the full backs , but again it ends up in crossing the ball to Aduriz, which as we see in not very effective, since he is no threat alone and is easily dealt with. This forces Aduriz to come forward to receive the ball and he is just not dangerous from outside the penalty area.
We can also see that there is no fall back option for Mata, Vicente and Pablo to return the ball since Banega and Topal are too far away most of the time and thus any potential attack must be started all over again, by which time the danger has already past.
Now lets take a look at where the players should move to create more spaces and penetration to the Zaragoza defense. 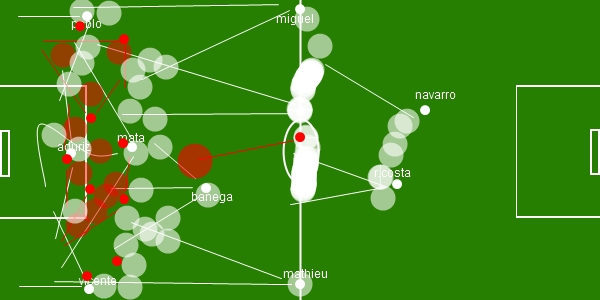 As you can see the positions are the same, Topal is DM and stays at the back the most, but R. Costa and Navarro are moving and positioning more freely and thus creating essentially a back of 3+2 where we can control the midfield. When Topal goes backwards, R. Costa should go more forwards and make himself available to the other players. Topal needs more movement as represented above, as he moves forward, R. Costa move back to cover the defensive line, Banega is in a more advanced position, but he also has more movement. Miguel and Mathieu should not move only on the flanks, they should act as additional midfielders, this will put pressure on the Zaragoza midfield and defense and should scramble their midfield ranks, negating the first line of defense. This in turn oppens more space for Pablo, Vicente and Mata to roam more freely. A good playmaker will spread the ball all over the pitch constantly shifting the defense, that man in this case should have been Banega, but instead he played too slow and too far behind, that the Zaragoza defense did not have to make huge shifts.
Continuing to Mata he needs to go more in the penalty box and with Banega in more advanced role on the pitch to pass the ball around. Say Vicente goes for a cross, Mata instantly converts into a full out attacker and Pablo comes inside the penalty area to create another man the defense has to deal with. This way we have 3 people in the penalty box, with Banega and Topal marching the final third and Mathieu and Miguel sitting on the flanks.
You can see on the picture that the more the players move in the penalty box the more danger they create and the more density they create for Valencia. The Zaragoza defense is more spread, has to worry for more players and their density reduces, creating openings for someone from Valencia to exploit, in that case it would be Banega and the full backs who are already positioned on the flanks.

I've heard people blaming the formation, but that is simply not the case. Its the positioning and movement within that formation that is most important. The positioning and movement are not good in this formation, because its more complex than the 4-4-2, each player needs to know exactly what their movement and position is and execute it perfectly. The 4-4-2 formation may allow more freedom for our players, but it doesn't mean its best. I think that Unai Emery and the players should work more towards the tactics, positioning, movement to get it right.
If everyone runs like headless chickens like we saw against Zaragoza, we can't win with any formation.
The main point is that the Defensive midfielders in this case Banega and Topal need more movement, they need to be more forward so we have basically more people the opposing defenses have to worry about. The more defensive minded Topal or Albelda (in other cases) will stay a bit more behind, while Banega(Fernandes and Tino in other cases) going more forward. There needs to be a line in the final third of Valencia players that will catch loose balls, spread the ball and be basically available to receive the ball.

Anyways even the best tactics can't work if they are not practiced, if they are ignored by players and if players change week in, week out. Emery needs a more solid starting eleven, players that will gel together, learn the tactics and form understanding for each other. Changing the starting eleven each game will not help to strengthen our weaknesses and while there needs to be some changes, they need to be more subtle and less frequent.

In the end its too early to press the panic button, but things need to improve, with an important Champions League match coming up and difficult matches in the Primera Division they need to happen fast, very fast.
Posted by SlickR at 1:39 AM
Email ThisBlogThis!Share to TwitterShare to FacebookShare to Pinterest
Labels: feature
Newer Post Older Post Home