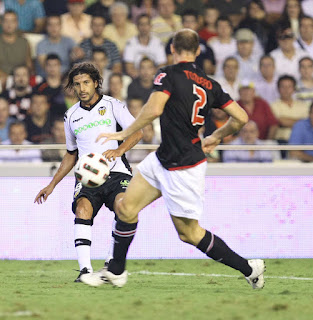 Valencia have a chance to bounce back after a recent string of poor results, that are beginning to question the squad depth to fight on all fronts for the whole season for silverware.
Valencia players are coming from a poor 1-1 draw against Rangers in the Champions League and a 2-1 loss to Barcelona in the Spanish Liga. The team is playing at home and few players have come out of injury and will be available for selection as well, so this will be a huge chance for Valencia to start winning again and continue their fight for top spot in the Spanish competition.
Everything but a win will be considered a huge failure and there is going to be questions starting to rise and pressure starting to mount on the squad, so this is the perfect opportunity to confirm the title credentials, regain confidence and boost morale.
Unai Emery will probably rest few players that started against Rangers and its also likely that we'll see a more offensive formation as 4-4-2 with two attackers from the start.

The biggest fear that Valencia will have to overcome is the ability to score, since 3 goals in 4 games does not spell wins and Soldado and Aduriz will have to be very concentrated and effective in front of goal if Valencia is to win the match.

Mallorca on the other side have managed to draw against Barcelona when they took them on in the Camp Nou, but couldn't really carry on their form and lost at home to Espanyol by one goal to zero.
Mallorca are sitting 11th on the table, 8 points behind Valencia and just 5 points above the lowest team. Mallorca are having trouble scoring this term and are one of the teams with the lowest possible goals, but are actually quite decent in defense and can defend strongly as showcased against Barcelona.

Mallorca coach Michael Laudrup expects a tought test against Valencia and is weary about them saying:"We will have to be very concentrated," he said, according to Sportinglife.com. "Valencia are a very competitive team with players of great quality".

Valencia: Joaquin and Miguel are still injured, Feghuoli has also been injured, while Maduro is fit and should probably be included in the team. There has been reports that Cezar may be injured, but that's still to be confirmed.

Mallorca: Mallorca have no injury worries and the whole squad is available.

Result prediction:
Valencia CF 1-0 RCD Mallorca
After 4 matches with little scoring opportunities and only 3 goals, as well as playing a match just 3 days prior I can't see Valencia scoring many goals, coach Unai Emery will be weary of the Mallorca attack after a bad display from the defense against Rangers and will probably set up a mid defensive line in order to not concede goals. Mallorca have a tough time scoring goals so I don't see them scoring against Valencia either and Moya will be ready to show his worth and deny any shot Mallorca manage towards the goal.
Valencia will ultimately be able to score a goal and win and out biggest threat should come from Vicente and if we score an early goal, you may expect even more goals, but if we don't score early I expect a small 1-0 victory.
Posted by SlickR at 2:10 PM
Email ThisBlogThis!Share to TwitterShare to FacebookShare to Pinterest
Labels: match preview
Newer Post Older Post Home