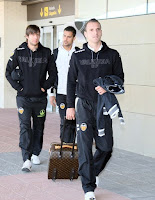 In a hour and a half the Copa Del Ray match between UD Logrones and Valencia CF will start.
UD Logrones was formed only in 2009, so they are a very inexperienced team and basically the biggest minnows Valencia can face.
Valencia on the other hand has played 3 matches in a row without victory, 2 losses to Barcelona and Mallorca and just a fraw against Rangers in the Champions League. This is a great opportunity to bounce back and regain some of the form and confidence.

There is not much to talk to about this game, everything except a high 3/4-0 victory for Valencia will be considered failure, especially taking into consideration Unai Emery did not call up any youngsters for this match.
Most of the out of form or recently injured players are expected to play and ones that have no or little playing time are also probably going to start in the match.

Result prediction:
UD Logrones 0-4 Valencia CF
Basically Unai Emery will be playing with a full strength squad, with the usual rotation policy, there are no youth players and the team is going to play the tried and reliable 4-2-3-1 or possibly 4-4-2 formation, so anything less than a high victory will be considered big failure and may even question Emery's job.
Posted by SlickR at 6:46 PM
Email ThisBlogThis!Share to TwitterShare to FacebookShare to Pinterest
Labels: match preview
Newer Post Older Post Home