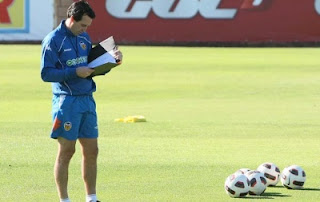 Valencia coach Unai Emery chose not to bring any youth player to the first Copa Del Ray match against UD Logrones, instead some of our players who were injured or didn't play much will be featured.

The biggest surprise is the inclusion of Pablo who has played all 4-5 last matches and I think should have received a little rest.

Feghuoli and Cezar are injured and are not expected for at least another week, while Joaquin and Miguel have recently returned to normal training after quite long injuries. Also featuring will be Dealbert who is yet to start in the first eleven.