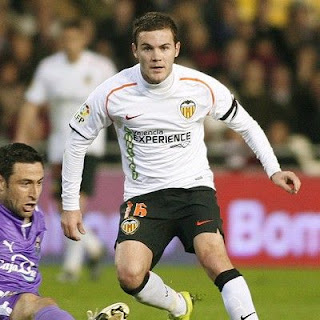 Valencia winger Juan Mata is set to receive a contract extension with increased salary and bonuses. The contract extension was originally planned for last year, but with the grim financial situation and loss of form for Mata the negotiations stopped, but they have now resumed and a contract extension is surely to happen in few days.
Juan Mata manager is his father Juan senior who has been very vocal about improving Mata's current contract, but president Llorente has stood firm that the contract can only be improved in Q3 2010.

Mata has been up and down since the season started and I have been very critical of some of his performances. Here are my ratings of Mata since the beginning of the season:
vs Atletico Bilbao; Mata 6
vs Man. United; Mata 2
vs Sporting Gijon; Mata 6
vs Hercules; Mata 6
vs Bursaspor; Mata 6
vs Racing Santander; Mata 6.5
vs Malaga; Mata 5
Overall mark: 5.3
Posted by SlickR at 5:05 PM
Email ThisBlogThis!Share to TwitterShare to FacebookShare to Pinterest
Labels: news
Newer Post Older Post Home