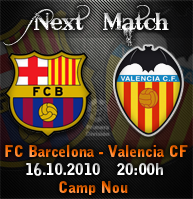 Valencia are still undefeated in the League with 5 wins and 1 draw and will be looking to at least extend their unbeaten run and continue with the good performance and see if they can genuinely become a title challenger.

Barcelona on the other hand are coming from a miserable draw at home against Mallorca and will be looking to bounce up and show it was only a tiny slip-up and that they are not in any scoring crisis.

This match is crucial for both teams, on one hand a loss for Valencia can mean loosing first place standing, loosing a lot of ground in the table even with just one game, loosing confidence and moral and loosing the unbeaten streak. On the other hand anything but a win for Barcelona will be considered failure and after recent bad results there is going to be a ton of pressure to Barca players and coach.

So a win is a must for Barcelona, all else will be considered a failure, while Valencia will also be happy with a draw, especially since the game is played at the Camp Nou. Valencia will be hoping that Barcelona continue its poor form at home this season and will try to put early pressure on Barcelona in order to score a quick goal that will really hit Barcelona.

New Valencia striker Roberto Soldado is hoping his side can add to Barca coach Pep Guardiola's headaches this weekend, saying: "It's the moment to hurt Barcelona. They are suffering at home, we are playing well away and we have to take advantage of these circumstances."

Squad news:
Barcelona may be without their talisman midfielder Xavi due to a long term injury he has been caring, but he is probably going to be available. David Villa was also a risk, but he's been confirmed to be ready to start.

Valencia will be without the injured Maduro who actually has quite a long term injury and will probably be out for another two weeks, Joaquin is also injured, got this new injury only 2 days after he recovered from him previous injury. Topal is also injured and will probably not feature, but good news is that Ever Banega is fully fit and most of the squad in injury free.

Result prediction:
Barcelona 1-2 Valencia CF
Barcelona may be the defending champion and may be regarded as the best team in the world, but they are currently out of form and had bad results on home terrain. They have weaknesses in defense and are not too proficient at goal. Valencia on the other hand are in full form, confident and posses the physical power to overcome most Barcelona players especially in attacks with crosses. Aduriz and Soldado should have many opportunities and should they convert those chances Valencia can win.
Posted by SlickR at 9:54 AM
Email ThisBlogThis!Share to TwitterShare to FacebookShare to Pinterest
Labels: match preview
Newer Post Older Post Home