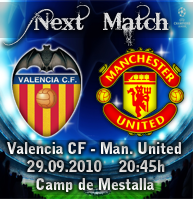 Valencia CF play their biggest match so far this season in all competitions. This match is going to show if Valencia's dreams of playing with the big boys can become reality or it will remain just a dream.
Valencia are coming to this game undefeated for 11 home matches in the European competitions and will look to continue and build on those results.
Valencia leads the La Liga table with 13 points and are unbeaten this season in the domestic competition also, they are also coming in after a Champions League game against Bursaspor in which they won by 4 goals to 0.

Manchester United FC are coming to this game with a series of mixed results, they drew the last game in the Premier League with Bolton and failed to capitalize on Chelsea loss. They are also coming off from a draw against Rangers in the Champions League.

This is probably the most interesting match in the second round of the Champions League and both teams have much to prove. Although Manchester United are favorites on paper they haven't had much luck against Spanish teams and have failed to score on their last three visits. United have won just once in 18 visits to Spanish opponents, with eight draws and nine defeats.
Valencia are going to want and build on this as historically their record against English teams is W7 D4 L2.

Valencia played last game against Sporting Gijon with 2 attackers in a 4-4-2 formation and it was probably a testing field to see how the team behaves. Valencia won the game by 2 goals to 0 and offensively it was probably a good game. Valencia coach Unai Emery also rested few players in that game that will most surely feature against Manchester United.

Manchester United played their last game with all regular first eleven starters and their squad at full force, but they only managed a draw with Bolton. Rooney was the biggest flop in that game and has been playing badly from the start of the season, he has also been in the news for his off-field actions and alleged affair.

Valencia president Manuel Llorente also showed up in a press conference and had a swing at Real Madrid, who have been angry why Barcelona are ahead of them, he said: "Seems like news about who is top of the league hasn't reached Real Madrid yet", talking about how Valencia is currently leading the table with 13 points ahead of Barelona and Real Madrid.
He also spoke about the match against Man. Utd." Its an important match in every way and we think it will be one of the most important matches this season. We'll play against a big team and I hope we can win."
Valencia reached two finals in the Champions League after being in a group with Man. United and Llorente commented on that: "I hope history will repeat itself".

Hedwiges Maduro spoke to goal dot com and said how the match against Manchester United will be the biggest test of the season. "We want to show our qualities in our stadium against such a great opponent. Its a big test because Manchester are always one of the favorites to win the Champions League. They're a really big team with a great coach, so this will be a tough game and a really big test for us."

Manchester United midfield Darren Fletcher wants his team to work hard at keeping the ball when they take on Valencia in the Champions League.
He said how they have experience playing in Europe and how they can cope with the travel and different styles of play. He said: "Against Spanish sides, keeping the ball is key. If you give the ball away cheaply, you might not see it for a few minutes and they will punish you."

Squad news:
Manchester United FC will be without Wayne Rooney and Ryan Giggs, both are out due to injuries.

Valencia will have to do without Ever Banega who is still injured and will probably need one more week of recovery. Chori and Mata had a scare as they felt some discomforts, but the team doctors have confirmed it wasn't anything serious and are back with the squad and in full training.

Valencia will be without winger Joaquin who has started in all but one match this season for Valencia CF. He picked up a muscle strain in training and has been redrawn from training and will not play against Manchester United.

Result prediction:  Valencia CF 2-1 Manchester United FC
I expect a tight and very competitive match with chances on both sides. Valencia are playing at home and will have huge support from the home crowds, they also have enough firepower upfront to score goals, but Manchester are a strong team and are likely to get a goal of their own also.
It will all come down on who controls the ball the more and who takes their chances. I still predict a narrow victory for Valencia.
Posted by SlickR at 12:09 AM
Email ThisBlogThis!Share to TwitterShare to FacebookShare to Pinterest
Labels: match preview
Newer Post Older Post Home