Valencia CF won against Sporting Gijon 2-0 in what was a pretty dull match with mostly long balls and half counter attacks. 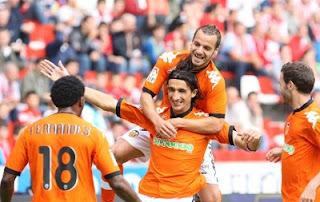 Valencia started furiously, I was still getting prepared to watch it and its 1-0 for Valencia with Mehmed Topal the scorer. Not even 3 minutes later its 2-0 and this time Soldado scores the goal. Sure the game looked like it will become a goal fest as I predicted, but after a decent chance ruined by Mata in the 20th minute the game slowed down, almost to a full stop.
From there on it was like another Valencia went on the field, they gave the ball to Sporting Gijon and were content to sit back defend and occasionally try on the counter attack.
This was happening from the 20th minute, until the final whistle. Both sides had few chances with Valencia's chances looking more dangerous, but those were mostly half baked counter attacks, no wonder they didn't score a third goal.

Anyways tactically it was a mess, I give Unai Emery a score of 1, he even made a ridiculous decision to bring Chori in for Aduriz, only to take him out minutes later for Jeremy Mathieu. WTF were you thinking Emery?
Soldado or Pablo would have been the logical choices as they were tired, but to substitute a substitution?

Strange decision, hopefully we'll hear from him what was that all about.

Player ratings:
Cezar - 7: Assured performance, wasn't really stretched, but made two impressive saves.
Bruno - 7: Great display from Bruno, really confident in defending and wasn't afraid to go forward.
Navarro - 6.5: He had a good game, pretty clean and straightforward.
R. Costa - 7: One of his better performances, was very solid at the back and had a great calming presence.
J. Alba - 7: Run tirelessly all match long, very lively in defense and attack and made several good tackles to deny the opposition.
Topal - 7: Did very well defensively, needs to work on combining passes with the team, but scored a goal.
Fernades - 5.5: Good defensively, but didn't control the game well as Ever and recently Tino Costa have been doing. Was expected to bring the back forward, but failed to do so.
Pablo - 6: Had a decent performance, involved in attacks, but gave the ball away too much.
Mata - 6: Also had a decent game, but as Pablo he gave the ball away too much.
Aduriz - 6: Had limited chances and had to feed off of scraps.
Soldado - 6.5: Managed to score a goal, otherwise had few half chances and mostly had to feed off of scraps like Aduriz.
Subs:
Chori - NA: Ridiculosly substituted for Mathieu.
Feghuoli - NA: Had few touches with the ball, but Gijon had full control of the game for him to show anything, though could have celebrated if he managed to do better with a run he had.
Mathieu - NA: Not enough time.
Unai Emery - 1: What happened to the Valencia of the first 20 minutes? Was it a tactical thing to preserve energy? After half time the team played or not played at all, just defended. And what was with substituting Chori who came in as a substitution himself?
Posted by SlickR at 8:23 PM
Email ThisBlogThis!Share to TwitterShare to FacebookShare to Pinterest
Labels: match report, results
Newer Post Older Post Home