On Sunday night Hercules will host Valencia after 13 years of pause, since Hercules played in lower divisions than Valencia. The two teams and fans have incredible rivalry going on for decades, so expect this to be a fierce match, of not on the field, than on the stands.

Hercules are coming off from a surprising and incredible victory over Barcelona. Hercules managed to get some talented players this summer, namely Trezeguet from Juventus and Drenthe from R. Madrid, so they are no push overs. Even without these players Hercules seem to be tactically sound after two games and are going to prove to be tough opponents. 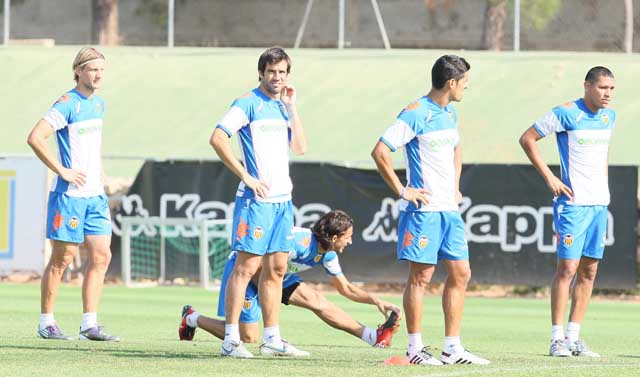 Valencia on the other side are coming off of a splendid victory over Bursaspor in the Uefa Champions League. They trashed the Turkish champions with 4 goals to zero. Valencia also has two wins in La Liga from two games and will look to continue their good form.
While the win over Bursaspor is great, the team should not loose focus and get over confident, instead the team must work hard and prepare best for this match. Tino Costa also had a lot of praise for his performance against Bursaspor and impressed many journalists, experts and fans, but not me. I'm still cautious and I will only consider him as a great player if he plays brilliantly for a month. He has only played 2 games, one after coming off for the injured Banega and one in the Champions League, so that's 160 minutes total.
He needs to show his worth over several games and perform consistently all the time.

My thought on the best line-up: Same as above, but instead of Mata I would put Chori Dominguez.